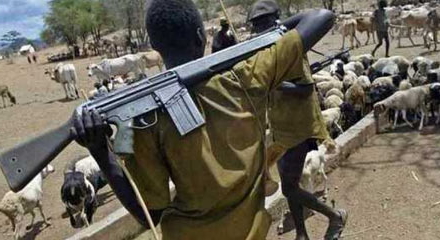 Efosa Omoregie, a popular Edo farmer has been murdered by some Fulani cattle men who invaded Oben community in Orhionmwon LGA of Edo State yesterday.

According to eyewitnesses, some youths who tried to stop the herdsmen as their cows were eating crops on Omoregie’s farm scampered for safety when the herdsmen suddenly opened fire on them.

When Omoregie saw the confusion, he ran for cover but fell in the process.

A Fulani cattle boy reportedly caught up with him and shot him on the chest as he was trying to get up.

The corpse of the married father of 12 children had been deposited at Oben Cottage Mortuary.

Edo State Police Commissioner said some personnel have been deployed to the area to maintain law and order.

These herdsmen have become a threat to the safety of the public. Something must be done urgently to curb this menace.

May the soul of Efosa Omoregie rest in peace.