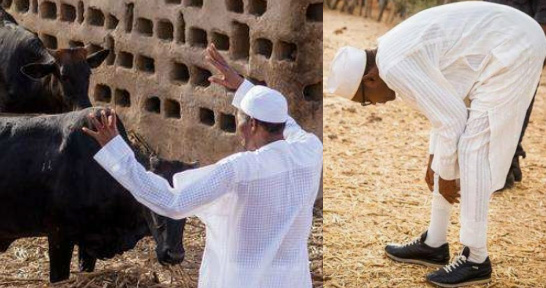 January 18, 2018 – Fulani Crisis: What A Cow Says About President Buhari

There was a video of President Muhammadu Buhari that shocked me recently and undermined my confidence in his ability to end the deadly attacks by Fulani herdsmen.

It was not the video of him purportedly admiring a cow in his Daura ranch on a tablet. And certainly not the tape of his reported visit to former Governor Lam Adesina 18 years ago, as the leader of the Miyetti Allah Cattle Breeders Association delegation.

It was a clip from Saudia Arabia.

After the president’s visit to that country and Qatar in February 2016, the NTA reporter on his entourage interviewed him. The last question was about what the president planned to do about the attacks by herdsmen.

He started well, but in an incredible foot-in-the-mouth moment, he said if a man had 400 or more cows, there was nothing the herder could do about his cattle invading another man’s farm. It was, in effect, an endorsement of trespass too stunning to believe, especially since these were not just pastoralists, but armed herdsmen.

Yet, we’re living the endorsement. In the wake of the deadly attacks in Benue, the security services are not only trying to popularise the notion that trespass is all right – or minor communal irritation at worst – they’re looking for scapegoats, or more appropriately, scapecows. Word is gaining ground that Governor Samuel Ortom is largely responsible for the killings!

I’ve learnt not to put anything past politicians but it would take a whole new level of cynicism for this story to make sense. But that’s not for those inside Aso Rock.

Two other sentiments just as incredible, but sadly true, are the statements comparing the number of victims killed this time with those killed under President Goodluck Jonathan, and the claim that when 800 Fulani herdsmen were killed in Mambilla, Kajuru and Numan, the government did nothing about it. Even if only one herdsman was killed, it should not go uninvestigated.

But when did the promise of change by the ruling APC become a debt to unleash our worst selves?

When I think of the endless rows of coffins of different shapes and sizes driven on low-bed trailers through the streets of Makurdi last week; of women weeping and children too confused to understand what was going on as grieving crowds went on their way to the cemetery, all I think about is justice, not blame-trading.

President Buhari has promised justice, but it’s hard to believe him after watching that Saudi Arabia video. It’s hard to believe he’ll deliver justice after he told a delegation of Benue elders to his office to restrain “your people” and in the name of God, “to accommodate your countrymen.”

The 73 or more dead are also your people, Mr. President. The bereaved families are your people. The wounded, the dispossessed and the displaced are all your people and they deserve protection from their commander-in-chief.

And if they could not get the protection they deserve or have the president in their midst in their moment of grief, why should they trust him to give them justice?

Why should any community in Nigeria suffer such confirmed large-scale loss of human lives, while the president sits on his high horse hosting delegations from the bereaved communities in his office and begging them in God’s name?

And it was in that same week when the bereaved were turning the dust over their dead in Makurdi that the president hosted Nasir El-Rufai and six other governors who said they had come to Aso Rock to ask the president to run for a second term.

It was a shameless, self-serving stampede for presidential affection that took no account at all of a country in grief.

I’m not sure why God’s name was dragged into the Benue killings, but he will not do for us what we’re perfectly able to do for ourselves. And if that sounds like speaking in parables, then watch the trending video of how the police in Ghana tackled the menace of armed herdsmen in Agogo and Afram plains in the Eastern region, after the cattle farmers refused to obey court orders against their trespass.

Cattle breeding is private business and God is not a dairy farmer. Those who are clamouring for government-sponsored cow colonies need to be reminded that a Scotsman started Obudu in 1951, and it was one of Nigeria’s most successful ranches until government grabbed it.

Even after independence, several ranches were created, like the Bornu Breeding Ranch and the Manchok Fattening Ranch, largely through private efforts, with help from international agencies.

Nigeria is not among the world’s top 20 by cattle inventory and yet we’re shedding more blood over cattle than India, Brazil and China, which together control over 60 percent of the global cattle stock.

Sure, there’s a role government can play, but examples from countries that have made serious and sustainable progress suggest that intervention is often restricted to areas like regeneration/preservation, research, targeted grants and relief, especially in cases of natural disasters. And such interventions are normally spread over the value chain and dispensed transparently.

It should worry Buhari that his words and body language are enabling the aggressors and impeding healing, justice and the pursuit of peace in this conflict.

Agriculture minister, Audu Ogbeh, may think we have not done enough until we have given our heads to armed herders on a platter, but he should ask El-Rufai if appeasement has made any difference.

After a series of deadly attacks by the herdsmen, the governor sent emissaries to them in Niger and reported as follows in an interview (just as disturbing as the one Buhari had in Saudi Arabia) published by PREMIUM TIMES: “In most of the communities, once the appeal was made to them (the Fulani herdsmen), they said they have forgiven.

“There are one or two that asked for monetary compensation. They said they have forgiven the death of human beings but want compensation for their cattle.”

He said nothing about the victims of the trespass.

Before El-Rufai, Jonathan also tried to pay off the herders. He asked the Central Bank to release N100 billion to the states for “mini modern ranches” across the country.

The money was released without appropriation and cowboy governors, a number of who are enjoying their second term today, disappeared with the billions.

Now, we’re back to square one. All the talk about cow colonies, hydrological zones, Saudi grass and what not, is still about how to appease the aggressor herdsman, spread their hegemony and create another pool of funds that will also disappear into private pockets.

It should worry Buhari that his words and body language are enabling the aggressors and impeding healing, justice and the pursuit of peace in this conflict.

Can he shed his tunnel vision and become the broadminded statesman that Nigerians thought they voted for three years ago?

About the author: Azu Ishiekwene is the MD/Editor-In-Chief of The Interview and member of the Board of the Paris-based Global Editors Network.

Continue Reading
You may also like...
Related Topics:Buhari, cow, Fulani

A Call For Unity In Southern Nigeria
Fulani Herders/Farmers Crisis: Why Cows In Nigeria Should Be Fed With Hay Like Cows In Europe