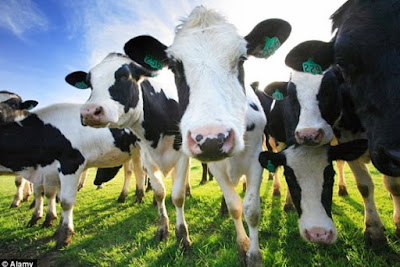 January 19, 2018 – Opinion: Why Are Fulani Herders Not Feeding Their Cows With Roughage Plenty In The North?

Fulani Herders/Farmers Crisis: Why Cows In Nigeria Should Be Fed With Hay Like Cows In Europe

Last year I travelled to Kano. It was actually my second time and the circumstances were a bit different.

In the first instance, I was passing through to another state in the north, and for anyone who has read T.S. Elliot’s Journey of the Magi, this journey was like a death: we had spent the whole of the day driving to Kano from Benin and only to arrive by dusk when the sights and sounds of this famous city were already being overtaken by the dark.

My plan to get early to this famous city and perhaps to see something of the relics of this town: the dying cotton fields, the Kano city walls and all other monuments which I read about in school faded into the horizon. My friends had told me that Kano is to northerners what Lagos and Onitsha is to the Southwest and Southeast respectively.

Apart from the fact that I was already in Abuja before I set forth, I was mindful that this journey could be another death for me if I did not set forth before dawn. And so that was what I did. As I rode on, I marvelled just as I did the first time I travelled up north, at the vast expanse of land Nigeria is blessed with, and which could translate to zillions and zillions of football fields. This time however, it was not the thought of football fields which took hold of me but the arable-ness of that vast landscape.

The Kano city I saw is a clean city with a cosmopolitan muscle. And if I have any thoughts of going up north to live anytime soon, Kano it would be. But take it or leave it, the average northerner is a farmer, and a very good one at that. Very good evidence for this assertion is the disappeared cotton fields and the groundnut pyramids of the early 50s and late 60s.

And at this point, I crave readers’ indulgence to relate my experience with my former principal in my place of primary assignment during my NYSC years. It was the beginning of the planting season and just about when anyone with any modicum of self-respect was already planting – tomatoes and beans, I was lazing around. As I took in this agrarian activity one morning, my principal sidled up to me to ask why I was not planting beans like everyone else. I told him that where I come from, yam, rather than beans was a man’s crop. I had cause to regret in three months when I found out that find my youth corps members who heeded that call to farm around the premises harvested about two to three bags of beans.

I recall that as I got within the precincts of Kano, what was dry and very coarse landscape suddenly began to transform into fields and fields and fields of sorghum, maize, millet, rice and corn. The only other place where I’d seen anything of this nature was in 2008 in the North Rhine-Westphalia in Germany.

For the North Rhine-Westphalia, I know something of the processes which the Germans put in place to be able to cultivate their seeds all year round and then roll up the hay or alfalfa hay with maize, sorghum or millet to be used for feeding livestock – cows, sheep and what have you – all year round. I also know of a fact that that hay is a component of the mishmash of cow dung and genetically modified seeds fed into gigantic silos from where the gas residue sidles easily to most German homes.

But where or what system sustains agricultural production in the north up till the harvest and harmattan season? As I looked around, the answer struck me in the face: forgive me but I cannot remember the actual name of the massive EU funded irrigation project which drives the agricultural economy of the north. But there is one as a matter of fact. And this is actually the crux of this discussion. After 73 Benue citizens were mowed down about two weeks ago allegedly by Fulani herdsmen, I have tried to make any meaning for the reasons for the killings.

It is said that Fulani herdsmen are unable to graze their cattle because of the dwindling mangroves vegetation in the north on which they graze their cattle. Therefore, it is said that they have no choice but move to people’s farms and graze their cattle. But I find this theory to be specious and spurious and very difficult to accept and believe. Know why? If the cows in Europe are no different from the cows in Nigeria, I see no reason why they cannot be fed on hay like the cows in Europe. And as a matter of fact, fodder and roughage to feed cows is plenteous in the north from maize, millet, sorghum harvest residue to the extent that I believe that that chap asking us to import hay/grass to feed our cows is the most unserious Nigerian alive today.

Two things stand out therefore: one, if the Kano government has over 17 dams in place with respect to its irrigation programme, I do not see why all the other governments in the north are not establishing dams and providing water and grazing fields for their cattle. If they are not doing so, it may therefore mean that certain aspects of the rumours making the rounds as to the true intent of the proposed grazing colonies may be true.

Countries and peoples have fought wars over water holes and grazing fields. Yet, Nigeria does not need a war now or in the future and we do not need to be colonized a second time to know what to do.

In a book I am reading now, The Anatomy of Resource Wars, Worldwatch Institute, 2002, the authors have said that many resource-rich countries like Australia and Botswana have not fallen prey to violence. Where conflict does break out, it is the result of a combination of factors – political, social, economic and military (note this last word), – that makes for weak, though typically repressive and undemocratic states and vulnerable economies.

The cold-blooded murder of 73 persons in Benue State under the guise of grazing field or colonies therefore brings us to the question of climate change. It is real to the extent that we must now begin to realize that it is what is responsible for desert encroachment, desertification and droughts. If we have no plan in place to mitigate these climate change precursors, then we open ourselves up for unscrupulous individuals to cash in to prosecute a personal agenda and vendetta.

About the author: Etemiku is of Africa Network for Environment & Economic Justice, (ANEEJ), Benin City.

Fulani Crisis: What A Cow Says About President Buhari
Before We Are Scammed Again: A Wake Up Call To All As 2019 Election Approaches