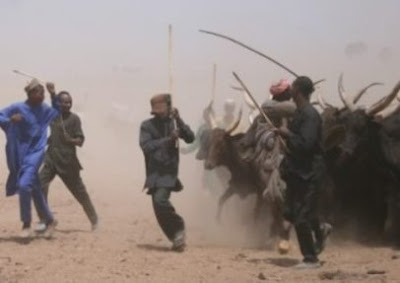 Fulani herdsmen attack is the second largest killer of many in Nigeria today with several attacks unreported.

Few days after nine persons were slaughtered in an ambush by Fulani herdsmen, another 10 Tiv farmers were, yesterday, feared dead in a fresh attack in Guma Local Government Area of Benue State by suspected Fulani herdsmen.

The attack has also left many missing while farmland, houses and huts were not spared.

Vanguard gathered from an eyewitness that the assailants attacked Mbasenge community in Mbagwen in the early hours of Tuesday, killing and burning houses and farmland of their victims.

He said two other persons, Kwaghsaa Iorbee and Orsaa Akosu, were also killed in his presence before he managed to escape. “As I talk to you, there are many others we are yet to ascertain their whereabouts,” he said.

Calling for the intervention of the state and Federal Governments in the matter, he lamented that the attacks were coming at the time of full scale farming activities.

Speaking to newsmen in a telephone interview, member representing Guma/Makurdi Federal Constituency, Mr. Emmanuel Jime, expressed displeasure with the recurrent insecurity in his constituency and the wanton killings and destruction of property.

Jime said the National Assembly would have to take urgent steps to check the recurrent bloodbath being unleashed in parts of Tiv land by Fulani invaders.

When contacted, the Benue State Police Public Relations Officer, PPRO, Deputy Superintendent of Police Daniel Ezeala said the command had not received information on any fresh attack in the state.