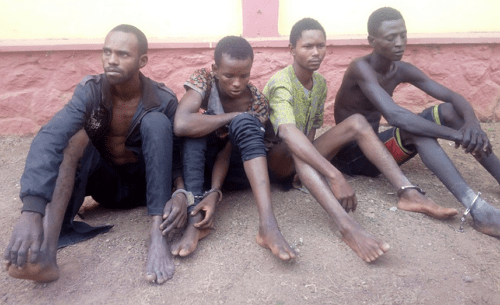 The victim, Soniyi Taiwo was kidnapped on January 10 around Fidiwo-Ipara area of the state while returning home from a function.

The operatives were said to have combed the forest for days until the kidnappers set him free upon discovering that the Police were closing in on them.

The Commissioner of Police, Kenneth Ebrimson who paraded the suspects at Eleweran, the Command Headquarters, said the suspects were arrested after the command’s “technical and forensic investigation” enabled it to geo-locate them and the victim in the forest.

Ebrimson added that the initial arrest of three of the suspects, led to the subsequent arrest of the fourth who fled but was tracked to Idi-Ayunre in Ibadan, Oyo state capital.