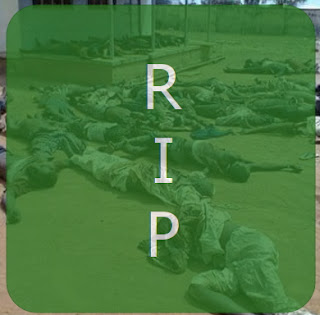 A community leader in Taraba state and 28 other were during the week killed in fresh attacks by Fulani herders.

The attacks, which took place between Tuesday and Wednesday, occurred while the dust was yet to settle on herdsmen attacks on some Benue communities early in the year, which resulted in the death of about 70 residents.

No fewer than nine people were cruelly killed in separate attacks in Gishiri, Dooshima and Danwaza villages of Taraba State while another attack by the herdsmen on Karmen village, Ibi Local Government Area, left the traditional ruler, Zaki Gabriel Ukovur, dead.

Eleven people, including women and children, were feared killed in Wukari and six others in Gassol.

The Taraba State Broadcasting Service (TSBS) had reported yesterday that two people were killed on Tuesday when gunmen attacked Donnada village in Lau Local Government area where a mass burial of more than 68 persons took place.

The caretaker chairman of Ibi Local Government Council, Bala Bako, who confirmed the attacks and killings to newsmen in a telephone, said the killers operate on the same network as the Fulani gunmen who attacked Logo and Guma local government areas of Benue State in the New Year, killing about 73 people.

In Ibi Local Government Area, Bako said, the gunmen struck when the people of the area had gathered for a security meeting.

He explained that worried by incessant attacks by Fulani militants and other security challenges, the people had converged to seek a solution, but the meeting had hardly begun when some Fulani marauders emerged from the bush and launched a deadly attack on the people.

Bako said: “We are having security challenges in Ibi Council, and we have been making efforts to ensure that all the ethnic groups in our domain accommodate one another and live together peacefully.

“The chief (traditional ruler) of Ibi was able to set up a committee that was sitting to find a lasting solution to the problem. It was in one of the meetings that the Fulani gunmen attacked and killed the monarch.

“The people had gathered and were waiting for us for the security meeting when suddenly an armed Fulani man emerged and started shooting. The local chief was killed during the attack.”

Despite wielding guns, eyewitnesses said, the attackers used sticks to hack the monarch to death in a gruesome manner.

“It was dreadful,” one resident said.

The council chairman said he mobilised security men who went and evacuated the corpse.

“We share border with Benue and Nasarawa states, and most times, these Fulanis cross over from Nasarawa to attack and go back.

“We are trying to close all the routes they have been using to attack us.

“The killings in Dooshima and Gishiri, near Sarkin Kudu, were also done by the group which attacked Benue.

“On their way back to Nasarawa, they have been killing anyone they meet on the way,” he said.

Confirming the attacks in a telephone conversation with our correspondent yesterday, Taraba State governor, Darius Ishaku, said some communities were being attacked by herdsmen in the state even as he spoke.

“How can you be killing people because of grasses or cows?” he wondered.

“The killings by Fulani herdsmen in some parts of the country is more than the feud between farmers and cattle pastoralists.

“It is a drive for territorial control, and we need to protect the people. We must protect the country.”

Ishaku yesterday insisted that the “Open Grazing Prohibition and Ranches Establishment Law” has come to stay, as unprovoked attacks and killings by Fulani militants have continued unabated after mass burials of 73 persons in Benue and 68 in Taraba State.

The governor urged the elite in Taraba State to join hands and eschew the temptation of playing politics with the security and economic wellbeing of the masses.

Members of the Miyetti Allah Cattle Breeders Association of Nigeria are in court challenging the anti-open grazing law which comes into enforcement January 24.

The Taraba State Chairman of the Miyetti Allah Cattle Breeders Association, Sahabi Tukur, told newsmen that the state government has not put in place measures to ensure that herdsmen have a smooth switch from their traditional open grazing to ranching, which he said is a more challenging system of rearing cattle. According to him, ranching requires commitment of huge sums of money to acquire land and develop infrastructure for the benefit of the animals.

He said: “The timing of the law is wrong because it fails to carry all the major stakeholders along, and the government has also failed to provide some of the basic infrastructure to enable the herdsmen key into the idea of ranching.

“We have few days to the take-off of the law and not even a single foot of land has been allocated for ranching. So, what do you expect the herdsmen to do?”

Governor Samuel Ortom of Benue State told a delegation of All Progressive Congress (APC) governors who visited him in Makurdi that all is still not well in the state despite assurances from the federal authorities about boosting security.

“We thank God that peace is gradually returning to the state but there are still pockets of challenges here, we know the challenges will soon be over because our people are always alert to give useful information to security operatives around,” he said.

He alleged continued threats by herders to unleash more terror on the people.

”Let me tell you that our people are still living in fear and under siege; living in fear because of the series of threat by Kautal Hore which started the threat since seven months ago, they are not mere threats,” Ortom said.

“We have evidence against them, what we are saying is that federal government should arrest the leadership of Kautal Hore.”

Governor Kashim commiserated with the government and people of the state over the recent killings but warned against attempts by “some political dinosaur from Abuja or any part of the country to cause unnecessary issues.”

Continue Reading
You may also like...
Related Topics:funmen, kill