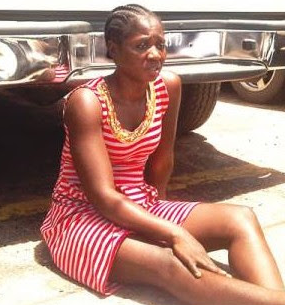 “While I was in primary school, I got pregnant but lost the baby. My trouble started after I got married to Mr Arinze who lives at Orifite, Anambra State. I decided to come to Lagos this year in search of greener pastures. Before leaving, I was pregnant. But on reaching Lagos, I had a miscarriage, without my husband’s knowledge.

“When the miscarriage occurred, I told myself that I won’t go back to my husband with another story again because he won’t be happy.

“I work in AP Forte Oil Filling Station as a sales girl. There I met a woman two weeks ago, who usually buy kerosene from the filling station.

I visited her at about 5pm on September 26, on my way to Boundary market . While there, she handed me her nine months old baby, saying her other children had gone to church. I was tempted to leave the shop with the baby and headed straight for a park and boarded the next available vehicle to Anambra where I presented the baby to my husband as his.

“I stole the baby in order to take care of him as mine. I have suffered so much embarrassment because of my childless state. It was the devil’s handiwork. When he wants to work, he takes total control of one,” she said in tears.

On her part, the 42-year-old mother of the rescued baby, Mrs Aina Adetola, described the five days of separation from her baby as the worst days of her life.

She said: “I neither ate nor drank anything for the number of days my baby was separated from me. I contemplated killing myself because the whole blame was heaped on me. I was sent out of the house by my angry husband, saying I should not return without his baby. I went through untold pain and anguish.

“I never expected such an act from Jennifer because she was of great assistance to me anytime I went to buy kerosene from the petrol station where she works. When she visited penultimate Saturday, I handed her my crying baby out of trust, unknown to me she had sinister motive. She told me she was going to get him bobo drink and that was the last I saw of her and my baby.”

When approached, father of the baby , Mr Adeniyi Adetola, who expressed joy over the baby’s rescue, said

“we were very happy when we saw our child again. I love children so much and the idea of losing one of them shook me to my bone marrow. However, I kept praying for his safe arrival . My advice to parents is that they should be very careful and wary of people they give their children. This experience has, indeed, taught me a great lesson.”