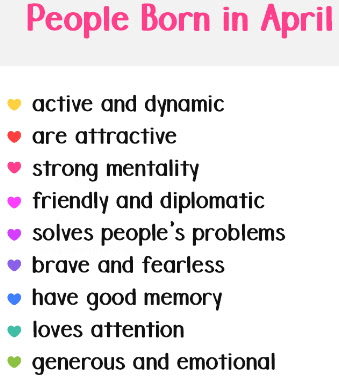 If you were born in April or expecting a baby this month, congratulations! April is the first full month of spring and is a time of renewal and growth. Easter generally falls in April. Both the religious and secular celebrations of Easter symbolize new life.

April is believed to take its name from the Latin word aperire, which means “to open.” April is the month when blossoms open and new leaves appear on barren trees.

Colour and life return to the northern hemisphere as the southern hemisphere moves into autumn. It is also thought that the name may be a reference to Aphrodite and that the month may have been originally called “Aphrilis,” or “Apru,” after the goddess’s Etruscan name.

Along with Easter, there are many other holidays in April, quite a few of them with religious significance to various traditions. These include Passover, Buddha’s Birthday, St. George’s Day, Good Friday, and St. Mark’s Eve.

If you were an April baby, your birth flowers are the daisy and sweet pea which bloom in April, spattering the earth with color and adding their sweet scent to the air. Your birthstone is the diamond. The diamond is believed to be a great amplifier of the energies of other stones and of the wearer.

You can use diamond to amplify the positive effects of aquamarine, emerald and amethyst, as well as your own energy.

An April baby can be either an Aries (April 1st-19th) or a Taurus (April 20th-30th). Aries is a strong fire sign. Most Aries are curious, energetic, ambitious and restless. In approaching their goals they act with confidence and in their dealings with others they are direct.

If you have an Aries baby, be ready to raise a bold and competitive child. Aries usually retain their competitive natures into adulthood and carry the force of their personalities into the workplace and their relationships. Famous Aries include Thomas Jefferson (April 13) and Leonardo Da Vinci (April 15).

Taurus is an earth sign and generally a Taurus is a stable, grounded person who is conservative with decisions and makes a deeply loyal companion.

Taurus is generally level headed even in intense situations but can be explosive if pushed over the brink.

As a child, Taurus is usually pliable and reasonable but also can be intensely stubborn. They usually fit well into school and work situations, and thrive best in a stable environment which reflects their own inner natures.

Some well known Taurus figures include Ulysses Grant (April 27) and Audrey Hepburn (May 4).

Whether your April baby is a fiery Aries or a grounded Taurus, you are sure to find yourself with a strong willed and energetic child who will grow into a powerful adult. 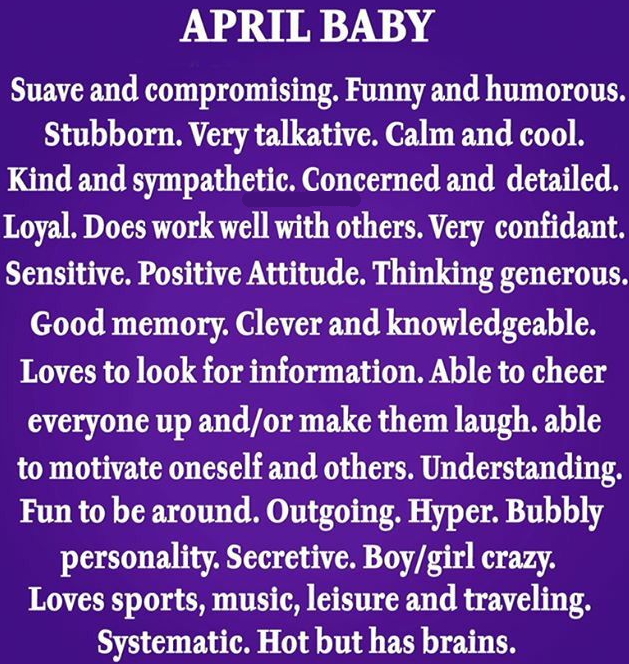 As the first full month of spring, April is an encouraging month to be born indeed!