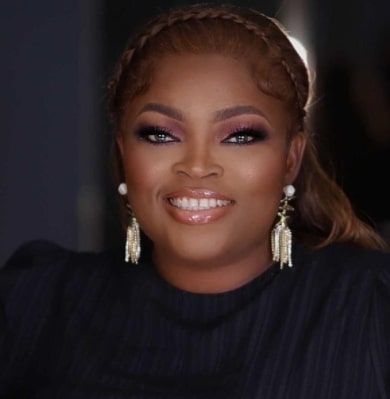 Funke Akindele To Young Ladies “Do Not Rush Into Marriage”

Nollywood Actress Funke Akindele-Bello has revealed what she went through when her first marriage failed.

She explained this in a recent interview with media star, Chude Jideonwo.

The mother of two advised young ladies not to rush into marriage saying ‘if you rush in you’ll rush out’.

She said her first marriage ended in a bad way on social media.

‘I was actually filming and somebody called me and told me, I cry, you know I wanted to die.’

She added because of the failed marriage, she also lost some good deals.

However, she said she remained strong, stating “I didn’t let it break me.’

Akindele-Bello thanked her mother who encouraged her to focus on her work and move on.

She said she collected a lot of scripts from the South East and that was how she survived that period because she channeled ‘it to work’.

In concluding her interview, she said ‘to the young lady:

“Ignore the gossips, ignore the naysayers. Give them the middle finger because you have your life, do what makes you happy.”

The actress is married to singer Rasheed Bello and the marriage is blessed with a set of twins.

Unrest In Zamfara As Gunmen Kidnap 50, Kill 4 Overnight
The Rise Of The New Deadly Femme Fatales