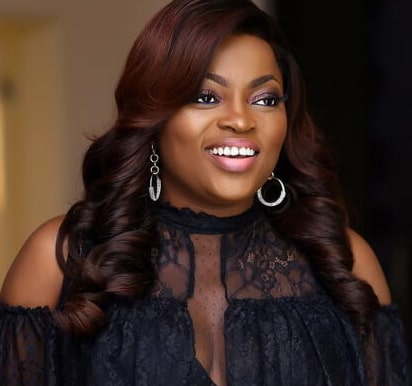 Congrats on your directorial debut, how was it like working from behind the camera?

It was a mixed feeling. It was fun, challenging and tiring. It gave me the opportunity to work with EbonyiLife TV as a director. Shooting Your Excellency was worth it. We shot for one whole month.

Is this something that you have always wanted to do, shooting a movie?

I swing both ways (laughter). I am an actor and writer. I direct and produce. It is something I have always been doing.

What attracted you to the script?

The story line was created by Mo Abudu and developed by her too; it was just amazing! It is not a regular story line. It is not something you expect.

What is the important lesson viewers should take away the movie?

Be happy, positive and don’t underrate anyone. Don’t say this person is too low for me. Keep doing your thing. It is a political comedy or a comedy movie. It is lesson-filled and also to make people laugh.

When EbonyLife TV approached you for another project, how did you feel?

It is always an honor working with EbonyLife TV. The CEO, Aunty Mo Abudu is somebody I respect so much. She works so hard and is determined. Although, I worked with her so years ago on Screen Divas. That was before Chief Daddy in which I acted. The truth is, whenever I see the positive drive of Aunty Mo I just want to double on my own. So when she reached out to me to work as director and lead cast on Your Excellency, I was so happy and jumped at it despite my busy schedule.

How easy or tough was it joggling the role of a director and lead cast?

I must say tedious because I do that a lot as Head Writer for Jenifa’s Dairy including some other content you see on Scene One Productions. This is more tedious for me because this is film compared to TV Series, and we kept on working every day. I am super proud of the outcome so far and I can’t wait for people to see what we have cooked.

What is that role that you haven’t played?

So many roles. Watch out for 2020 because one of those challenging roles I haven’t played is coming out. I have done some serious roles too not just comedy.

So much has changed especially with what EbonyLife TV is doing. What sort of films do you think we need to do more?

But Lionheart was disqualified and that is a setback…

It’s not a setback. I love the movie. The Oscar rejection made the film more popular. People had to go watch it hence it gained attention far and wide. I think we should do more of indigenous and historical movies to tell our stories. I am talking about stories like Sango and all of that.

A lot of people want to go into the Industry and look up to you, what do you think they have to possess in order to succeed?

First, you have to be sure you have the talent. You can’t force talent or do something because someone else is doing it. You can learn how to act for sure but you must be willing to learn. Then stay focused. You must be patient and enduring. You have to work hard. Do not be distracted. You have to be well branded. Listen to correction and grow organically. I did Screen Divas with EbonyLife TV some years ago and now I am directing a movie with the same EbonyLife TV. It is called organic growth. Then, you have to be very respectful.

Which is more comfortable, acting or directing?

Honestly, I think acting because I get to express myself so well and going by the fact that this is what I have been doing for so many years, I feel so much peace doing it. Directing takes a lot out of an individual.

Could you share the synopsis of Your Excellency with us?

Your Excellency tells the story of Chief Olalekan Ajadi, a bumbling billionaire businessman and failed presidential candidate who is obsessed with Donald Trump. Just when his campaign looks set to be another disaster, Ajadi is anointed by a major party and becomes a credible contender all through the power of social media. As the political drama unfolds, it seems possible that even the most inept candidate with little to offer voters except viral soundbites and amusing antics can mount a serious challenge for the presidency.

So, when is your creativity normally at its peak?

I draw inspiration from things happening around me. I could get an idea and when I am in the bathroom taking a shower, I develop it. Later on, maybe, during a massage, I could give the concept a deeper thought.

In as much as you claim to love cooking, how often do you find time to cook?

I still cooked last night but I don’t cook every morning because of my busy schedule. I cook every time I am free and have nothing on my plate.

What is your special dish?

I love cooking vegetable soup (efo riro) very well and I either eat it with eba or fufu. I also cook fresh fish stew and Ogbono soup. I can cook anything ranging from beans to Amala and I cook well.

Do you agree with people that call you a workaholic?

Yes, I am. It is very bad but I think it is time to take a break from work.