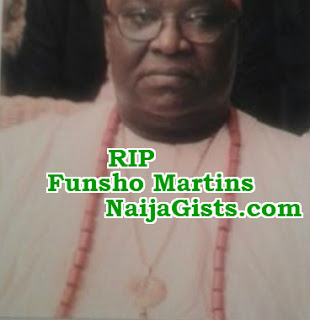 October 30, 2017 – How Retired General Drowns In Lagos Lagoon Days After Returning From Burial Of Relative In London UK

According to Kunle Martins, the deceased who recently returned to Nigeria from the burial of a relative in London UK met his untimely death on Saturday when his car collided with another vehicle on the 3rd mainland bridge.

The impact of the crash reportedly caused his Ford SUV to land in the muddy section of Lagos Lagoon around 10:55pm.

All efforts by divers to rescue Martins and his driver failed until the next day when an equipment was brought in to lift the vehicle from the mud.

The lifeless bodies AVM Martins and his driver were taken to the Nigerian Airforce hospital in Ikeja Lagos yesterday.

The former airforce officer was the founder of Martinos, an event and hospitality centre Agidingbi area in Ikeja.

The late General was also into real estate. The estate known as Golden Park Estate, is located at Kilometre 33 on Lagos-Epe expressway and Sangotedo.