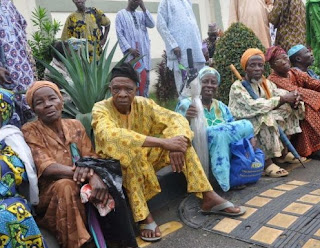 7 pensioners have died in Ekiti State in the last two weeks following the hardship they faced with non-payment of their pensions and gratuities, it was learnt yesterday.

At their monthly meeting yesterday in Ado-Ekiti, the state capital, the council’s pensioners urged Governor Ayo Fayose to pay their eight-month pension arrears.

They also urged the governor to pay them their gratuities, which had not been paid in the last five years.

The pensioners regretted that the situation had caused them untold hardship.

Acting under the aegis of Concerned Local Government Pensioners’ Forum, the pensioners expressed shock over the spate of deaths of retirees who could not take care of themselves.

In a communiqué issued at the end of the meeting and signed by the forum’s Protem Coordinator, Alhaji Quadri Oguntuase, and Secretary, Mr. Biodun Agboola, the agitated pensioners urged the state government to accord pensioners’ welfare utmost priority.

The retirees observed a minute’s silence in honour of the seven, who attended last month’s meeting.

Addressing reporters at the end of the meeting, Oguntuase expressed dismay at the condition of the retirees who he said served diligently in their prime but dumped to poverty and hardship in their latter years.

“The situation has become unbearable for us and we have no option than to cry to for world to know that pensioners are suffering in Ekiti.

“The rate at which we are dying is alarming. Imagine the harvest of deaths in the last two weeks! Seven of our members died within the period and the situation was caused by non-payment of our benefits.

“It’s because our monthly pensions are not paid. Many of us lack the money to eat and to take care of our families. The denial of our rights has made many of us to become irresponsible fathers and husbands at home. In fact, many of those who died had no money to buy drugs to manage their ailments or to take themselves to hospitals. Things are as bad as that.

“We want the state government to pay us our pensions and gratuities. We believe it is not an offence to diligently serve our fatherland. The government should not watch while we suffer, because our entitlements are our rights. We should not be denied of them.”