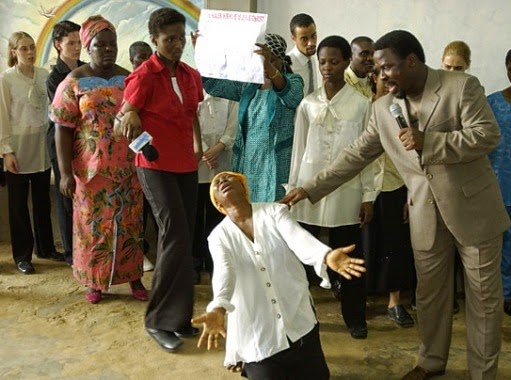 When God revealed it to the presiding pastor (Pastor and church’s identities withheld) of one of the Pentecostal churches in Ogba area of Lagos to or­ganize a week long crusade last December, the man of God must have probably anticipated that God was planning to perform major miracles that would cata­pult his ministry to the next level.

Indeed, miracles were not in short supplies at the crusade. How­ever, the supposed miracles, as it turned out, have little or nothing to do with the church beyond the fact of the church being the host of the crusade where the ‘wonders’ took place.

As it appears, God has only decided to use the church in ques­tion as a base to launch an assault against the wolves who parade themselves in sheep skin and to sanitize the Christendom which is being infiltrated by impostors who fake miracles with the sole intention of deceiving unsuspect­ing Christian faithful for selfish motive.

No fewer than four members of a syndicate which specializes in stage-managing miracles in churches in the country are cur­rently squealing on some pastors of notable churches they work for in the country as well as some of the miracles that they have conjured in conjunction with their accom­plices.

Undoubtedly, nothing short of a divine intervention would have been responsible for the arrest of the suspects who are currently furnishing the police with information about their modus operandi, past exploits and their accomplices.

Sunday Sun reliably gathered that the church where the miracles took place had organized a week long programme during which a Ghanaian pastor (name withheld) was invited as a guest minister. The Ghanaian pastor, it was learnt, ministered for most part of the pro­grammes during which a number of miracles was said to have taken place.

Having recovered from their shocks “they informed the host pastor that the Ghanaian pastor hired them to stage-manage miracles that took place during the programme and promised to pay them the sum of N250,000 which he never did before he left. They later demanded that the host pastor pay them the said amount since their acts were staged in the church, a demand the pastor declined, insisting he knew nothing about it.” Sun­day Sun further learnt that the host pastor would later call the Ghanaian pastor who allegedly denied knowing or contracting the gang.

Confused by the turn of event, the host pastor called to inform one of his friends, a pastor who advised him to report the matter to the po­lice since the people insisted they would not leave until they were paid for the services they rendered. “So he pretended to play along with them and succeeded in getting them arrested along with two other suspects.

Among those arrested are two men who gave their names as Joshua Ifeanyi and Kazeem Akinwale and two women who identified themselves as Mary Arikawe and Kemi Adeniyi. The suspects who are currently being held at the State Criminal Investigation Department, SCID Panti, Yaba, Sunday Sun was reliably informed are members of a syndicate which operates across the country. “They have confessed to be members of a syndicate which operates across the country. But those arrested so far are members of a seven-mem­ber gang which operational base is the South-west zone. There are other groups which operate in other zones in the country. The South-west group is headed by an Ibadan-based woman simply identified as Iya Ibo,” Sunday Sun was informed.

Although the Ghanaian pastor denied knowing the group, his denial appears not to hold water as it was gathered that the host pastor was able to identify two of the suspects to include those who claimed to have received miracles under the ministration of the Ghanaian pastor. “One of the two men arrested was said to have been recognized by the host pastor as the one who came to the crusade with POP around his neck, which the Ghanaian pastor pulled off and got healed after he was prayed for. And again one of the women was identified as the one whom the pastor brought out from the congregation and revealed so many things about her which she also affirmed as true during the programme. One of the things he said about the woman is that her husband deserted her over three years ago, a claim the woman said was true. He later prophesied that her husband would return soon.”

Revealing their mode of operation, the suspects reportedly said besides staging and being recipients of fake miracles, they also tried to get information about people, their problem and gave to their principals who would later relate to them during service as if he was seeing visions or receiving revelation from God.

As at the last count no fewer than names of 10 persons who claimed to be men of God had been mentioned. But a police source informed Sunday Sun that the police are still on the trail of other suspects while investigation concerning pastors involved is still ongoing. “Cases such as this one require extreme caution. That is why we are being meticulous about those pastors that have been mentioned so far but I can assure you that thorough investigation will be done on the case,” the source disclosed.