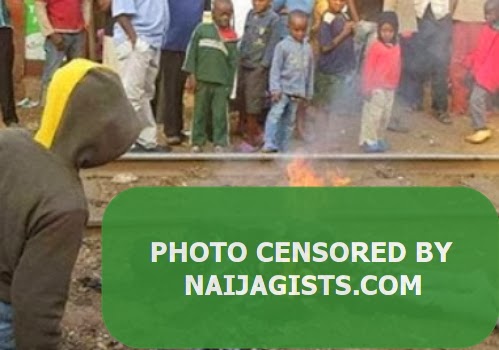 According to news from Uganda, the man pictured above was attacked by a group of anti-gay mob shortly after the passage a bill banning homosexuality in the East African country for being gay.

The bill’s original 2009 version, named “Kill The Gays,” went as far as calling for the death penalty for certain homosexual acts; that provision was shelved following international furore.

Under its latest iteration, anyone who conducts marriage ceremonies for same-sex couples faces seven years behind bars. Failure to report homosexual activity to police is also criminalized. Doctors who treat gays, landlords who rent them property and those suspected of being LBGTQ are subject to five-year prison terms under the bill.

The anti-homosexuals group descended on the alleged gay man and burned him alive with petrol as children watch.

There is no justification for burning a human being alive for whatever reasons and to do it in front of minors is even more barbaric!!

Africans and jungle justice may God have mercy.