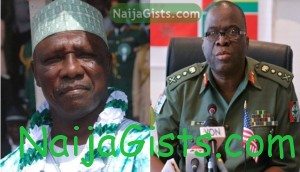 The party expressed shock over the demise of the two top dignitaries who lost their lives at Ogbia creek located in Okoroba village in Nembe LGA of Bayelsa State during an Helicopter crash that occurred around 4:45pm on Saturday afternoon.

The two and their helicopter crew died instantly when the helicopter busted inflames and crashed into the aforementioned creek.

Here is an official statement from PDP:
“The nation has lost a great patriot who in about two years in saddle as the Governor of Kaduna State demonstrated an unyielding capacity in wielding together varying fragile interests. He rendered quality stewardship to his people. Even in the face of daunting security challenges, nothing came close to compromising his iron cast resolve and faith that the phase must certainly pass. It is unfortunate that the nation has lost him at this critical curve in our national history.”

“On behalf of the National Executive Committee and other members of the PDP, the National Chairman of our great Party, Dr. Bamanga Tukur wishes to condole with the government and the people of Kaduna State as well as the family of late Governor Yakowa on this very painful loss. Your tear is our broken heart!”

“We wish to also send our heart felt condolence to the family of General Azazi as well as to the families of other Nigerians involved in the unfortunate crash. We beseech God to give them the strength to withstand this harshest sting of the painful loss of dear ones.”