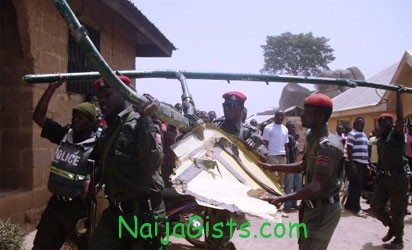 Saturday the 15th of December is another bloody day in the history of Nigeria after an helicopter carrying top politicians and dignitaries crashed following a funeral in Bayelsa State Nigeria. naijagists.com

The fatal crash killed all the people on board.

We learnt the Governor of Kaduna State, Patrick Yakowa and the former National Security adviser to President Goodluck Jonathan, Mr Andrew Owoye Azazi are among the casualties of this fatal helicopter crash.

We learnt the helicopter crash happened few minutes to 5pm following a funeral service that took place in Okoroba for the dad of Presidential adviser Oronto Douglas Oronto.

The helicopter that was carrying both the Governor of Kaduna state, Patrick Yakowa and ex-national security adviser, General Azazi from the aforementioned funeral crashed into Ogbia creek bursting into flames killing all the people on board.

President Jonathan wasn’t in Bayelsa state during the time of the crash because he attended RCCG Holy Ghost Night service in Lagos-Ibadan Expressway last night.

In March of this year, top Nigerian deputy police chief and 3 other officers died in a fatal helicopter crash that happened in Jos.