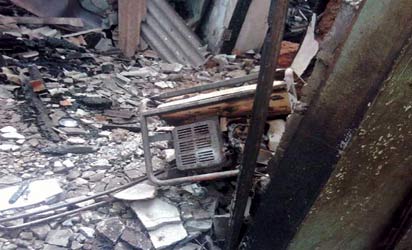 A Togolese man and his 2 kids have met their untimely death in Ikotun, Lagos over the weekend.

The 50-year-old father and his children were burnt alive after their generator exploded and destroyed their 2-bedroom apartment.

The survivor of the horrific incident, the wife and another child suffered severe burns and are receiving treatment at LUTH hospital.

The mishap happened around 8pm yesterday night at #8 odofin street in Ikotun Lagos when one of the children placed a lit candle near the generator that had just been filled with petrol.

According to sources, immediately she got close to the generator, it caught fire and exploded.

Before firefighters could come to their rescue, the victims had suffered severe burns.

The incident was reported at the Ikotun Police Station while the deceased corpses have been deposited at Ikeja mortuary for autopsy.