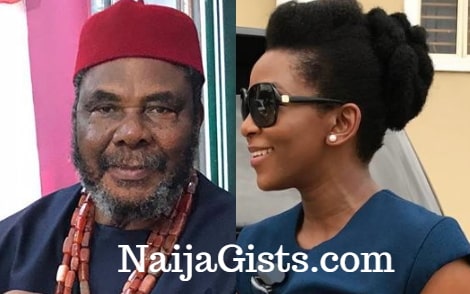 Igbos & Hausas Have Trust Issues, They Don’t Do Business Together – Genevieve Nnaji

Here is what the actress told The Nation Reporter Victor Akande about the series of events that led to the success of the movie.

LIONHEART tells the story of a young woman, Adaeze Obiagu (Genevieve Nnaji), who becomes saddled with the responsibility of running her sick father’s business under the suffocating supervision of an intensely crude and eccentric uncle. Her competing business instincts and family obligations become a catalyst for drastic change not everyone is ready to embrace. What I didn’t remember to say during the premiere is that Obiagu means Lionheart in English language, and it’s common for Igbo men to name their companies by their names.

Why she cast the likes of Pete Edochie, Chika Okpala (Zebrudaya)

Nollywood has given me so much… and I love my country, I love my industry. I felt it was about time we honoured those icons that pioneered Nollywood, because I felt they have been neglected and forgotten by my generation. So, it’s just a way of honoring people that we all love.People who laid the foundation for us.

On her choice of Enugu as film location

The truth is, Enugu was the Hollywood of Nollywood. Majority of Nollywood films you watched in the past were from Enugu in the Eastern part of Nigeria. I decided to shoot in Enugu, one, because of the scenery; I wanted to capture the different sides of Nigeria – everybody knows Lagos, everybody knows Abuja. But there are about 36 states. You haven’t seen all of Nigeria. This is just the beginning. I still have 35 more to go… No, 33, if we have to count out Abuja and Lagos because we’ve seen enough of that. Another thing is that Pete Edochie doesn’t fly. We had to go to him. But yeah, I wanted to do a classic and I wanted to connect with something I was familiar with. Every cast member was someone I wanted to bring back.

How long it took to shoot the movie

Preproduction was about a month. Developing the script took about two years, while shooting was three months. There were challenges here and there, but most importantly,  we wanted to get it right. So we needed to take our time.

On the wide appeal strategy for LIONHEART

A little advice I got from my editor when I was editing; I’m usually an advocate for a film by us for us. And I think there has been a disconnect over the years in the ways that we tell our stories. If you want to carry people along you just have to work towards it, in telling our jokes for example.

A word of peace for Eastern and Northern Nigeria.

The Igbo have a history with the North that has led to trust issues among ourselves. It stops us from moving forward. We can’t even do business together for the benefit of the country, and we are still facing that problem till date. I just wanted to showcase that here, and say that we should set our differences aside. I realized that language too can be a barrier, and there was a switch when both men (Pete Edochie and Sani Muazu in LIONHEART) could speak the same language (Hausa). So, those are the subtle nuances. We need to put Nigeria forward as a priority above the things that set us apart. And I hope the movie is encouraging and inspiring enough.

How she has promoted Nigerian products in LIONHEART

I just wanted to put in all my ideas and aspirations into this movie, all my hope that I have for the country and Africa as a whole. And that is why I used Nigerian made cars (Innoson Motors), took off all the wigs by making sure we all look much natural, showcase our fashion.