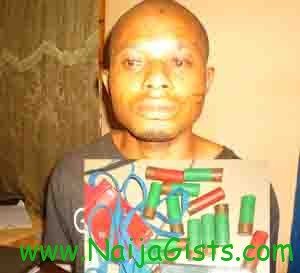 According to a report from the Daily Guide of Ghana, a Ghanaian grandmother has arrested a Nigerian armed robbery suspect by grabbing his balls, reports .

The 65-year-old woman with an iron-like grip could not withstand her daughter being attacked and robbed by two armed robbers. She fought one of the robbers, identified as a Nigerian, by grabbing his balls.

Mary Sagoe, according to police, held firmly while squeezing the testicles of the robber until police arrived at the scene. One of the armed robbers, only known as Lucky, managed to escape while suspect Daniel Richard Ikechukwu, 24, a Nigerian whose balls were firmly held on the ground, was arrested by the police. Items found on him included 15 live cartridges, a dagger, lady’s bag and belt.

The two suspected armed robbers, both Nigerians attempted to rob and kidnap the victim. This was after Sophia Sagoe, in charge of a Kia Sportage vehicle had gone to visit the mother at Dome Pillar Two around 7.30 p.m.

When the victim, after the visit, returned to pick her car which she parked in front of the mother’s house, the two suspected armed robbers emerged, with one wearing a mask. At gunpoint, one of the robbers ordered the victim to surrender her car keys; an order to which she obliged.

The two, after starting the ignition, pushed the victim into the car in an attempt to kidnap her as well. The mother of the victim, who could not withstand the daughter being kidnapped, pounced on Daniel Ikechukwu, held him and squeezed his balls hard.

Sensing danger, suspect Lucky took to his heels while Ikechukwu lay helplessly on the floor.

Police from Tesano were called to the scene and the suspect was arrested. Ikechukwu, according to the police, failed to give full details of his accomplice. Mr. Kyereme said Ikechukwu would be arraigned soon.

What is going on with these people tarnishing our image everywhere. Shame on this guy!