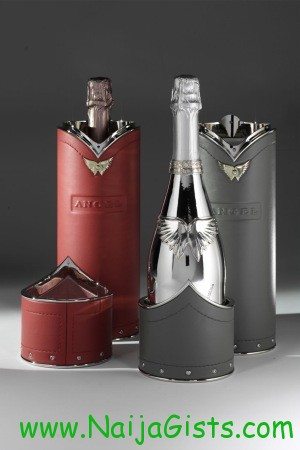 A TV Ad of a champagne drink called Angel Champagne which costs a whopping £2,500 or  N650,000 per a 1.5 litre bottle has sparked outrage in Lagos, with some people who read the advert, describing the price as ‘sheer madness’, in a country where more than 90 per cent of the people earn daily income of less than a dollar. Watcht the extended commercial below

The critics of the exorbitant price of the Angel champagne brand said  only those who have embezzled money can afford it.

Based on the advert, Angel Champagne comes in two different bottles, with the 750ml bottle selling for  £1,200 pounds or N312,000. P.M.NEWSfound that the Nigerian prices are about three times what the drink goes for, in all its various brand by its foreign producers. The black bottle of 750ml is sold for £380, while the 1.5litre bottle is sold for £640. The platinum bottle of 750ml goes for £562, while the platinum 1.5 litre variety goes for £777.

ANGEL champagne is produced by Stefano Zagni, a British entrepreneur, who argues on his website that the drink is meant for select people around the world. As revealed on the site, Angel is designed for the celebrities of Hollywood in the USA. The producers even parades more outrageously priced  Jeroboam platinum bottle of 3 litres at £5,725, about N1.9million. The site also sells a champagne vintage brut magnum at £188,000, which  is N49million in Nigeria’s battered currency. And this is just for a 1.5 litre bottle.

“The quality of Angel Champagne is testament to the passion of its creators. Throughout every stage of its refinement, care and expert judgment have been applied – in order that those fortunate enough to enjoy it know they are enjoying the very best.”, the website gleefully announced.

“Angel has limited annual production so its exclusivity is assured, that is why it is only available for purchase here, on the official Angel Champagne web site and very select venues around the world,” the website said.

But Nigerians who spoke with P.M.NEWStoday expressed shock and disbelief at the price tag with some describing it as a nonsense.

Mr. Gafar Akanni, a stockbroker in Lagos  was stupefied by the prices: ‘’Why? Why?…,”” he said, wondering why anyone will offer a drink for such hefty prices.

According to  Debo Adeniran, a political and human rights activist, the expensive champagne is a symbol of a corrupt society.

“This is outrageous. This is a symbol of  a corrupt society. This is how people show that they have money they did not work for. It is only a system change through dialogue or revolution that can stop the rot in Nigeria,” Adeniran said.

According to Tenny, a Nigerian student at the University of Cape Coast in Ghana, except the wine is made of gold, the price is highly  bloated.

She said: “What is the reason? What is the wine made of? Is it gold? There are millions of sick people that can be saved by that money. This can even pay for a heart surgery. What a waste. I am shaking my head for the foolish rich who will buy it.”

According to Ernest O, a computer graphic artist, “Nigeria is a great country and we deserve great things but the price of the champagne is meant to attract top politicians and celebrities and fraudsters.”

For Bukky Olusegun, a presenter in a television station, the champagne is not worthy of its price. She said: “Wow! That’s close to a million naira. In all honesty, even the richest people who would drink that champagne will only do so to show off. Quite a number of people would buy it. If I am asked to join those who would drink the so-called Diamond encrusted champagne, I will gladly say yes.”

When contacted this morning on the issue, a sales executive, Amaka Eze, said: “It is a luxurious wine for the elite. It is not for everybody. It is not a wine that one just drinks. It is mainly used as a gift.

“We are selling it already and people are buying it. The elite are buying it and it is not meant for Nigeria alone. It is for the whote West Coast region. People have their own opinion on the price but is a unique wine that comes in a box.

“We are in partnership with the company that produces it and they give us the price.” (culled from pm news)

What do you think about the price?