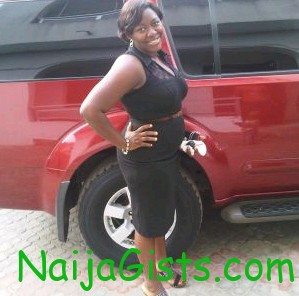 August 22, 2012 – Ghanaian Woman And Her Nigerian Husband Attacked By Assassins

A Ghanaian woman identified as Faustina Adigwe who was beside her husband met with an untimely death on Monday night when some suspected assassins on motorcycle shot at them at close range in Surulere, Lagos State Nigeria.

Popularly called Mama Derick, Faustina Adigwe was reported to have died on the spot while her husband is clinging to life at a Lagos hospital.

According to sources, the Duke Adigwe family are industrious and hardworking. Mr Duke Adigwe works as an event manager and her late wife shuttles between Ghana and Nigeria.

According to a source, Faustina is a very friendly and jovial woman with two young kids.

She was the only one who died on the spot because she was the driver during the attack.

“She was the one driving the car, which has tinted glass, and it is doubtful if the killers clearly saw the person they were firing at,”

“She was a very gentle and jovial lady who could not hurt a fly. She couldn’t have been involved in any shady business, so I can’t understand why someone could do this,” one of them said.

May her soul rest in perfect peace as we pray for the quick recovery of her husband.