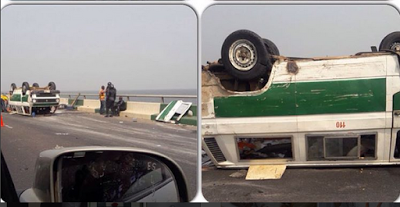 Among the injured were the Chief Clerical Officer, Ministry of Justice, Mrs. Shasanya Banire who could not move nor speak.

We observed that about four of the victims were in severe pains and speechless as they held their chest, neck.

It was gathered that the Ikeja bound bus tumbled after a saloon car with flat tyre swerved and hit the bus.

The bus was said to have lost its balance as the driver attempted to avoid the saloon car.

It was gathered that in the process the bus tumbled two times and almost plunged into the canal but for the iron bars barricading the lagoon.

The accident led to heavy traffic buildup on the bridge as motorists parked their vehicles to watch and take photographs of the scene.

It took the intervention of the Lagos State Traffic Management Authority (LASTMA) officials to clear the bridge so that a Lagos State Ambulance that came to pick up the injured could get to them.

Narrating how the accident occurred, one of the victims who sustained injuries on his head and back blamed the driver of the saloon car for their misfortune.

He said: “We were coming from CMS and going to Ikeja when all of a sudden; a woman driving a saloon car with a flat tyre wheeled her car and hit our bus.

“The bus driver was trying to avoid her, yet the woman kept coming. As soon as she realised she has caused a serious problem she zoomed off.

“She did not even wait. The bus somersaulted twice and it is just by the grace of God that no one died. So many people sustained injuries,” he said.