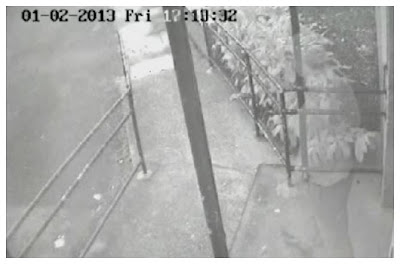 The video shows a slim man suddenly appear outside the entrance of South Ruislip Community Association and Community Centre on February 1.

It captures the transparent figure walking calmly towards a metal railing before seemingly disappearing into thin air.

The strange moment was reportedly witnessed by the centre’s caretaker who went outside to investigate.

‘I was sitting inside the hall and noticed a figure on the front CCTV camera,’ the caretaker is quoted as saying in the video.
‘I looked up at the screen and thought I saw a person but wasn’t sure so went out to check.’

He added: ‘I went outside and no one was there but I thought they might have quickly walked around the side of the building into the park so I just went back in.

‘After downloading the CCTV footage I was surprised to see that the figure had been recorded onto the system.
‘I can’t explain this.’ A previous chairman is said to have believed the building was haunted and he used to greet the spirits when he entered the building in an attempt ‘to make them friendly’.

See the video below.

Jide Kosoko’s Daughter, Adebanke Weds (Wedding Pictures Incl.)
Question Of The Day: Is It Proper To Answer Sir To Your Husband?