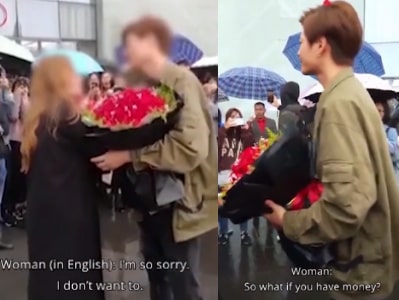 This is what happened over the weekend  outside the Wanda Plaza complex in Changha, Hunan China when a wealthy man who proposed to his girlfriend with a Lamborghini got rejected even after staging the proposal with fireworks, balloons and roses.

According to eyewitnesses, the man almost ran mad when his girlfriend said no.

He was heard saying “I have money, I bought your favourite sports car for you”  in Chinese but the woman politely rejected him in English saying ” ‘I’m so sorry, I don’t want to. I’m so sorry.”

Hurt and embarrassed, the frustrated man then lost his temper and went on a rampage, throwing the large bouquet of flowers to the ground and knocking over products on display at the plaza.

Watch the short video by Daily Mail UK below