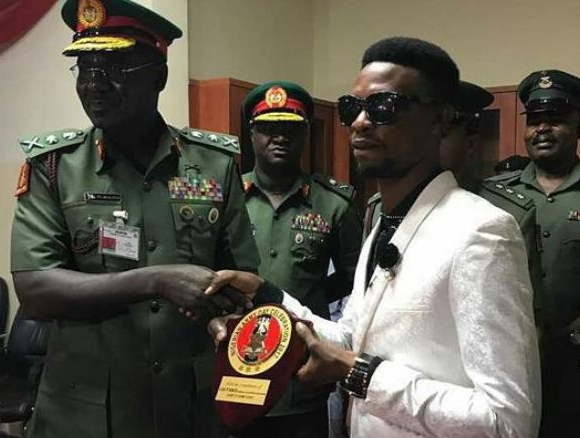 Popular comedian Francis Agoda aka I Go Dye has commended the military for dousing the tension generated by agitators in the South East.

The UN Peace Ambassador berated politicians and leaders who failed to address the issue.

Here is what the comedian said in a recent chat with The Entertainer:

“The recent agitations in the country, especially the South East led Kanu’s (Indigenous People of Biafra) IPOB is a failure on the part of the legislators and governors who were elected to protect their people. Why should all of us who have taken a pledge to defend the unity of this country through the national anthem, actively watched a civil situation expand into a monster, now been curtailed by the military? What a failure on our democracy.

“Let me remind us that almost all democratic institutions failed to mediate on the issues prior to this time, until the military stepped in to control further damage. I keeping wondering what were the honourable legislative members of both the State and Federal Houses of Assembly were doing all along, to redeem the situation or proffer as an alternative, to peacefully resolve the issues before the military got involved?”

We all have a responsibility to preserve this nation for our children, but from my point of view the military has been more outstanding in this regards, we all need to appreciate, thank the soldier and its affiliate institutions for their service to the nation”.

Continue Reading
You may also like...
Related Topics:army, biafra, i go dye, military

Nigeria’s Population May Hit 1Billion By Year 2050 – Experts Predict Population Explosion
Genevieve Nnaji Is Married To A White Man, This Must Be Her Husband – Fans Argue