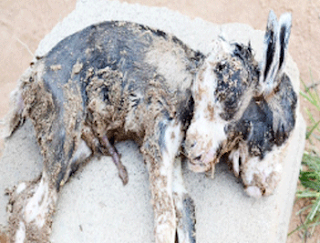 A one of a kind animal delivery happened at an Islamic village called Dawodu in Ilorin, the capital city of Kwara State Nigeria.

A she goat gave birth to a bizarre creature with two heads yesterday.

According to a witness, the labour yell of the she-goat was heard at about 4am on Thursday morning.

The labour pain became intense which forced the area residents to come out to see what was happening.

And to their surprise, they found the goat trying to deliver.

In the morning, the area residents were shocked to see the strange creature delivered by the she-goat.

The two-headed goat died and two others with normal birth survived.