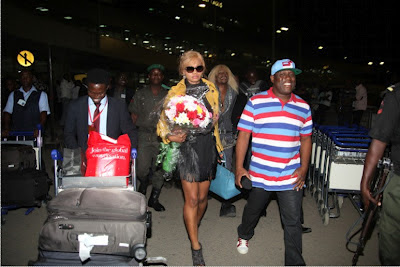 The wacky singer arrived at the Murtala Muhammed International Airport at around 8 p.m. aboard South African Airways.

She was received by some officials of Multichoice as well as Kenny Ogungbe, CEO, Kennis Music, a label on which Goldie is signed as a recording artiste and Denrele Edun, popular VJ with Channel O.

Sporting her traditional gold-blonde hair, four-inch platform heels and a dark sunglass, Goldie, devoid of her teary mien all through her 70 days in the MNet-sponsored television reality show house, look relaxed as she responded to cheers by fans who hailed her as she walked into the main arrival hall.

The 28-year old singer had failed to beat off stiff competition from fellow two housemates-Kyle and Lady May-slated for eviction last week. She received the lowest vote, and lost control of her emotions after realising that her quest for the $300,000 had come to an end.

Shortly after her eviction from the show, quite a number of fans had taken to the social media to express mixed reactions over her eviction.

She had the most emotional stay in the House, no thanks to her tumultuous relationship with the self acclaimed Masai warrior, Prezzo. This had made her shed tears several times on the show, an act that riled many of her fans.

Nigeria’s other representatives, Ola and Chris, had on 18 May voluntarily quit the game on account of ill health.

For three consecutive years, Nigeria’s Kevin Pam, Uti Nwachukwu and Karen Igho, had won the competition in 2009, 2010 and 2011 respectively.