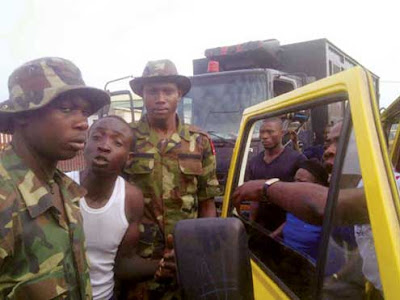 This might not be unconnected with the ‘humiliation’ of an Army Colonel by Governor Babatunde Fashola on Tuesday for driving on BRT lane.

The soldiers attacked the taskforce officials with bottles and stones and used knife to puncture two tyres of the Black Maria used in conveying offenders.

Trouble started on Murtala Muhammed Way, Yaba close to an Army barracks when the taskforce officials, who were on patrol to ensure smooth flow of traffic, spotted a commuter bus parked in the middle of the road and obstructing traffic.

The soldier was said to have called for reinforcement from the 81 Division barracks and within minutes, several soldiers trooped out from the barracks and began to haul stones and other dangerous missiles at the taskforce officials.

Some of the soldiers were said to be making unsavoury remarks about the governor for daring to arrest and humiliate an Army Colonel on Tuesday and decided to vent their anger on the taskforce officials.

As the situation worsened, the taskforce also called for a reinforcement.

It was in the heat of the clash that the tyres of the Black Maria were torn with knife and deflated.

An eye witness said a top military officer, a Lieutenant, allegedly ordered his boys to abduct some of the taskforce officials and take them to the barracks.

Calm was restored when a senior taskforce official intervened and asked his boys to beat a retreat.

Taskforce Chairman, Bayo Sulaiman confirmed the attack on his men and described it as an affront on the state government for soldiers to vandalise government vehicle.