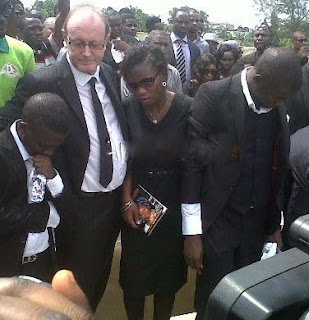 In an official biography of late Nigerian singer Goldie Harvey nee Filani, her younger brother Joshua Filani said he was the last person who spoke to her before her demise.

Joshua said he was on the phone talking with their dad who lives in Ekiti when the singer suddenly snatched the phone from him to complain about a splitting headache before she collapsed and fell into coma.

She was rushed to the hospital but she died on the way due to heavy valentine’s day traffic on February 14 in Lagos.

“Although Bimpe (Goldie) appeared energetic and happy all her life, on February 14, 2013, she complained of headache which led to her death. Her last words were with her father when she snatched the phone from her brother and asked that she wanted to talk to daddy.“While crying about a splitting headache, she asked for prayer support. Alas she went into a coma almost immediately and died on the way to the hospital due to the Valentine traffic.” – Joshua said

So sad may her soul rest in perfect peace.

Join Us On Facebook @ https://www.facebook.com/naijagists for timely news updates.