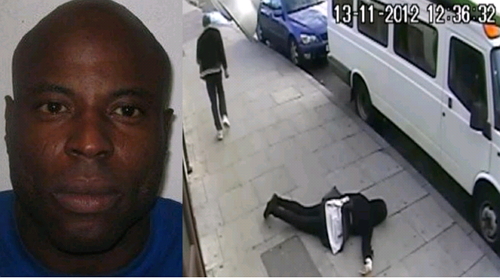 A Nigerian man identified as Michael Ayoade who is based in Plaistow East, London has been arrested and jailed after he was caught on CCTV camera punching a 16-year-old girl and another woman, 21 back in 2011.

According to the Daily Mail UK,  the first attack was at Plaistow Tube station on November 20, 2011, when he hit student Daniella Montieth, who is only 5ft 4in, in the side of the head, leaving her sprawled unconscious in the ticket hall.

Ms Montieth, who was studying political science and international relations, was taken to hospital with a broken tooth.
Shocking CCTV footage of the second attack was released by police in November last year as they appealed for information.

The 16-year-old victim was walking near the Black Lion pub in High Street, Plaistow, at around 12.30pm on November 13 when Ayoade jogged up behind her and punched her in the head. She immediately fell to the ground and was left lying unconscious on the pavement, suffering three broken teeth and a cut lip.

Ayoade, who is originally from Nigeria, had followed the teenager, who is 5ft 5in, for around 800 metres before he struck.

Prosecutor Joel Smith told the court Ayoade said she ‘made (him) feel like a pauper with her facial gestures’ and had ‘looked at him in a rude way’, and that he could not go through the rest of the day having taken ‘an insult from a little person like that’.

Ayoade had previously admitted two counts of assault occasioning actual bodily harm, and one count of possession of cannabis after a bag of the drug was found at his home.

On Monday Michael Ayoade was sentenced to four years for the attack on the teenager, and 19 months for punching the student, to run concurrently.