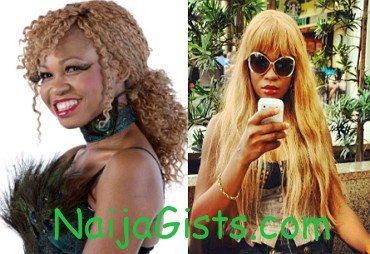 Since the sudden demise of Nigerian artist Goldie Harvey at 7:30pm last night in Reddington Hospital, her death has been linked with different causes.

While others said she died of travel related blood clot problem, Pulmonary Embolism, others said she died as a result of spiritual attack but a particular source who confided in PM news this morning in Lagos authoritatively confirmed that the Goldie Harvey died of cocaine drug complications.

The source who claims Goldie Harvey is a drug addict who has been doping since the beginning of her career said something went wrong last night.

Though her drug battle has never been revealed to the public but people in her circus are fully aware of her constant drug use hence her eccentric performance on stage.

A source in Lagos authoritatively confirm with us last night that the alleged drug addict, Goldie Harvey overused the drug last night because she didn’t use it during her stay in the US.

We learnt she overused the drug like a hungry individual yesterday which resulted into a serious complication for her.

They said she went into the washroom and few minutes later when she returned she was acting unlike herself. She complained of some many things like headache, backache, chest pain and so on but she didn’t reveal the truth to those who could have come to her aid on time.

After she struggled to breath for a while, we learnt she collapsed. She was immediately rushed to her official hospital where the doctors on duty pronounced her dead immediately.

Her people blamed the doctors for lack of immediate intervention but there is nothing they could do since she had already passed away long before her arrival at the hospital.

A source who requested anonymity confirmed with us that her people have secretly bargain with some physicians to devise a quick cause of her death in order to not expose her drug problem…An autopsy was carried out on her and the result reveals she died of Pulmonary embolism, a problem that is common with intravenous drug abusers.

The controversial aspect is that Goldie Harvey and her music management boss Kenny Ogungbe came on the same flight from the United States of America last night. People who welcomed her at the airport said she was in good spirit throughout her arrival until the aforementioned drug episode.

Goldie Died Of Pulmonary Embolism Due To Drug Abuse

Pulmonary embolism is a serious problem that is related with drug abuse.

Since doctors said Goldie died of Pulmonary Embolism then she might have died of drug abuse yesterday.

Also called PE, it is a blockage of the main artery of the lung or one of its branches by a substance that has travelled from elsewhere in the body through the bloodstream (embolism). PE most commonly results from deep vein thrombosis (a blood clot in the deep veins of the legs or pelvis) that breaks off and migrates to the lung, a process termed venous thromboembolism (VTE).

A small proportion of cases are due to the embolization of air, fat, talc in drugs of intravenous drug abusers or amniotic fluid. The obstruction of the blood flow through the lungs and the resultant pressure on the right ventricle of the heart lead to the symptoms and signs of PE. The risk of PE is increased in various situations, such as cancer or prolonged bed rest.

Goldie Harvey’s corpse has been transferred to LASU Mortuary.