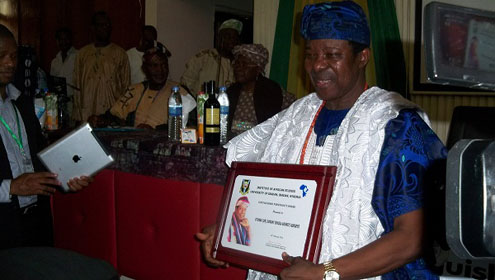 Popular Juju musician, Chief Sunny Ishola Adeniyi Adegeye alias King Sunny Ade has been described as Nigeria’s ambassador-at-large who has taken the nation’s name to the length and breadth of the world.

Professor Isaac Adewole, the Vice Chancellor of the University of Ibadan (UI) disclosed this Thursday during the Distinguished Personality colloquium organised by the Institute of African Studies of the premier university in honour of King Sunny Ade for his contribution to the music world.

The VC noted that his past works make him a golden fish that cannot be hidden, adding that he is also such a prolific artiste that never rests on his oars.

He noted that King Sunny Ade would forever be celebrated.

The chairperson of the occasion, Professor Bolanle Awe in her speech noted that King Sunny Ade was being honoured because the university has decided to appreciate African treasures and heritage.

She said: “It is important to us in Africa to focus attention not only on those things which have come from outside, but on those that have evolved from within our own African environment and whom our society has acknowledged as a source of pride to us. It is within this context that the university today has identified King Sunny Ade.”

Continuing, she said: “Whosoever has not heard of Sunny Ade, listened or danced to his music, is obviously to be pitied as he is obviously living only on the fringes of our society in Nigeria.”

Expressing their views, Professor Tunji Vidal, Professor Isaac Olawale Albert, Dr. Sola Olorunyomi, Dr. Kayode Samuel and Oloye Lekan Alabi revealed the life of the great musician through their different paper presentations which would be turned into a book latest by August.

They all described him as a gentle, humble creative, generous, humorous and discipline man. Reacting, King Sunny Ade said that he would never forget the honour done him by the university.

Those who also graced the occasion were Oni of Ife, Oba Okunade Sijuwade and his wife, Olori Moniola, who led at least 30 kings to the event.
[By Gbenro Adesina/Ibadan –  PMnews]