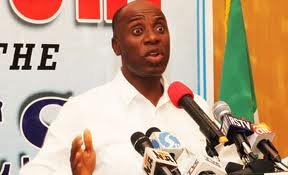 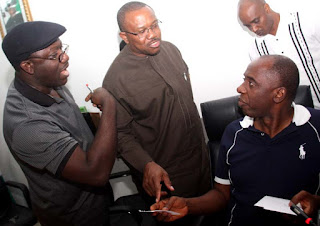 In Shakespeare’s Julius Caesar there is a talk about two lions littered in one day, one being more terrible. The same cannot be said for Governors Chibuike Amaechi and Jonah Jang, the way they are going about their roforofo fight over the imaginary chair of the Nigerian Governors Forum. Amaechi calls Jang an impersonator while Jang calls himself the authentic NGF chair. It is a dance of the absurd that is taking the toll on the polity.

For a fact, this issue must be quickly resolved. If Jang is an impostor he has to get the hell out and if Amaechi is, so be it too. This macabre dance is good to some extent, but it is losing its fervor for lingering for rather too long. Such dance is executed without delay and much care. It is like the one called ‘Opanda Ichida’ in Igbo land. Igbos say that if the dancer does not dance to it like one newly gone insane, it does not synchronize and so is the macabre dance engaged in by Amaechi and jang, too. To deicde the winner, the duo has to dance naked in the hot afternoon, as one Abuja itinerant poet once put it.

The significance of Amaechi-Jang ‘Opanda dance’ may not be appreciated now, but it is a great dance. It is a dance to win the most beautiful bride ever: the soul of the Nigerian nation, the world’s most populous black nation and Africa’s most populous too. Whoever wins this dance must thereof be rewarded; he marries the prettiest bride on earth and the other may go and lick his self-inflicted wound. There is no other way a victor may emerge in such a dance where there must be a vanquished and where there is room for retreat or surrender.

19 groomsmen (governors) are all Amaechi or Jang needs to shout, “All hail the King!”, as he declares himself the winner.

Some politicians say power is like a woman and has to be conquered by some forcefulness or foxiness or both. Some also say to understand what men can do for power, you have to first understand the nature of power itself. What can’t a politician do for a woman or power? Presidents and generals have gone to war over a woman. History is replete with such examples. A certain king of England abdicated his throne because a woman gave that as the only condition for him to marry her. To possess her he had to give up a whole kingdom.
People have witnessed violent fights in beer palours over a whore. Many who aren’t men enough take off. Some cannot imagine going home with a broken skull over a girl of easy virtue who could take off with a total stranger while the fight picked for her is still going on. You can still see the guys today with 3 stitches on the foreheads and carrying on as if it wasn’t for a woman he almost lost his life.

Power is like that. Like a whore, power will be gone with one who did not even fly a fist for once, nor took a blow to his chin in the heat of action. One also is; those who are prepared to lay down their lives for power hardly stay around to enjoy the booty. Some vultures are there watching; and hyenas. The vultures and hyenas do not kill the game themselves, but because they have great patience and most powerful jaws, can always snatch it from those who have laboured for it. Even the lion, the so called king of the jungle, dare not stand when the opportunistic hyenas approach.

Power is the same everywhere: in animal kingdom and in the political arena of man. Man is an animal; don’t forget, and nobody should be surprised when he behaves like his kit and kin in the jungle. Little wonder Olusegun Obasanjo came away with his classic title, “The Animal Called Man”.

Fredrick Nietzsche saw it an inherent need in man: the need for power and need to overpower. To Nietzsche, it is a victory that must come with glory, the glory that is conferred only by total annihilation of the vanquished. Niccolo Machiavelli also sees it as what man does to a follow man, when man deals a blow on a rival, it should be so severe that his recovery cannot be contemplated. That is the meaning of fight to finish, the type Jona has provoked in Amaechi or Amaechi in Jang.

Amaechi and Jang also remind one of such scenes watched in Nat Geo Wild. Politicians hardly observe or learn anything from life itself or history. Amaechi and Jang are in for a battle royal. But like John Cena whose wife divorced for losing to Undertaker and Undertaker too, these two little titans are going for the kill and totally unaware that the ‘hyenas’ and ‘vultures’ are hovering and gathering and will take the game away once it is dead and they too become tired to even feed from it.

Those who allowed themselves to be used in this manner actually cut very pathetic sight. Somebody said he who the gods want to destroy they first make mad and he who men want to destroy they first make god. Imagine old Jonah, whose name reminds one of Jango the cowboy, going to church to blackmail God by saying that Justice itself ( Almighty God) can support who succeeded in rigging. He has no truculence and no respect for old age and people of Plateau that he is burying alive in his misrule and inability to bring warring sides together for 6 years running.

Then Amaechi…oh! He too is also blinded to the point that he is nearly a stranger to himself. It is better that the macabre dance is concluded quickly to end this distractive rumble in the jungle so that the authentic NGF chair can proclaim his victory, like the lions do in the jungle do. That proclamation roar of the lion in the jungle, which every living creature dreads should come now or never.

It is always a delight watching the lion rise and fall and vacate the stage for a younger but stronger lion. Before the younger lion takes over the pride, he must have reached the capacity to match and vanquish the older lion. He must be strong enough or the older lion will deal with it hardheartedly. The choice is his: to take to hara-kiri or let the sleeping, hungry lion be.

The booty is usually the princely pride – lionesses and their cub. But only the lion that sired the curbs will be interested in seeing them alive; the invading lion will kill off the entire curbs once he vanquishes their father and either kills him or chases him away. Once this is done, the new king establishes himself and within hours begins mating ceaselessly with the lionesses to sire his own cubs. Instructively, no lioness will raise a claw to save her cubs when the massacre begins. Any lioness that does so is liable to severe bodily injury or even death. The mortal combat is such that the weaker lion, younger or older, could be killed. It is usually a short burst of strength and show. That is why one is seriously scandalized that Amaechi and Jang are still malingering, unnecessarily sizing each other up when they have since reached a point of no return – no retreat no surrender.

Nigerian governors are like these lionesses. They are too cowed to raise a voice for either Amaechi or Jang for fear of their seats or EFCC visitation. 18 of them are also coming back for second term and want that flank properly secured. No Amaechi or Jang is worth sacrificing 4 years of looting for? Two lions littered in one day indeed yet none more terrible. The dance is ‘Opanda’. If you are not crazy enough you need not engage in it in the first place. Let the absurd dance come to an end. The drummers as well as spectators are getting weary.

May the stronger side win, but may the masses not end up as the cubs that may be sacrificed by the stronger lion all because he wants to sire his own curbs.