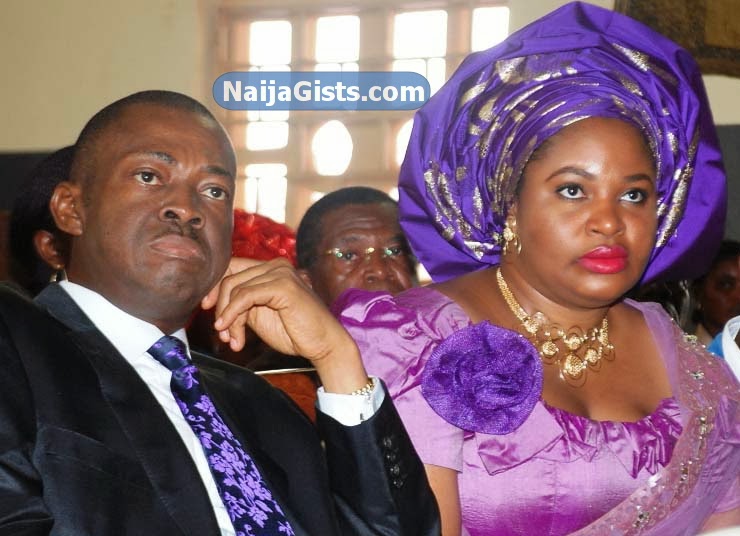 News broke on Wednesday that the big madam has denied she was held hostage by her husband, Enugu State Governor Sullivan Chime. The story that surfaced yesterday is just a tip of the iceberg.

In the detail report released today, Clara Chime admits she was locked up in a room with no access to laptop, telephone or any telecommunication device.

She also said she penned her physician in Nigeria and another doctor in abroad about her condition.

Despite her denial yesterday, Human rights activist, Mr Femi Falana insists he was briefed by Clara Chime to help in securing her release from house arrest imposed by her husband.

Chime, who also vowed to protect his wife’s integrity, addressed journalists on the issue in the presence  of  Clara and her elder brother, Mr. Tony Igwe.
Also present at the meeting are governor’s siblings, Mrs. May Oji and Dr. Jide Chime, as well as Clara’s neuro-psychiatric doctor, Dr. Aham Agumuo, among others.

At the interview session, the governor’s wife denied sending any petition to the National Human Rights Commission alleging unlawful detention by her husband.
She also denied hiring the services of Mr. Femi Falana (SAN) to seek her freedom from an alleged house arrest at the Governor’s Lodge, Enugu.

Although, Falana had claimed in his letter to some media houses and the Inspector-General of Police that he was engaged by Clara to seek her freedom from the alleged house arrest.
The governor, however, said that it was “so disturbing” for him to speak out publicly about his wife’s health challenges.
He, however, vowed to do everything, no matter the personal pains, to protect his wife from ridicule.

He said, “Well, my wife has some medical challenges and it would be very unkind for me to talk about her condition on the pages of newspapers.
“I have done everything to protect her integrity and I’m not now going to expose her to ridicule because some people want to exploit her situation to drag me into a needless war of words.

“We’ve been battling this (Clara’s health challenges) prior to my inauguration in 2011. It was so bad at a time that she had to be taken out of here (Governor’s Lodge) for treatment.
“When she stabilised, I pleaded with her doctors for her to be brought back here to be receiving her treatment at home and they graciously accepted.
“There was a time she was confined indoors and that was strictly on her doctors’ advice. She’s here and she can confirm or deny it. Also, the doctors then advised against allowing her access to   telephones and laptop.”

Then Chime paused, heaved a sigh and continued the story.
He said, “I cannot say or do anything to undermine her dignity. She is, first and foremost, my wife. The big blunder I committed was allowing her access to the telephone and her laptop, against the advice of her doctor. I’m paying dearly for that today, going by what is happening now.

“Her brother is here, her doctor is here with us too. You people (journalists) can confirm anything you want from them, either here and at your convenience.
“Would I have been a better husband if I asked her to leave the lodge because of her medical challenges? Would it not have been more convenient for me if I allowed her to stay and be treated in the hospital?

“But like I said earlier, I wanted the best for her and that’s why I pleaded with the doctors to have her treated at home. That is also why I allowed her access to her telephone and laptop, which unfortunately led to the stage where I’m now being falsely accused of imprisoning or detaining my own wife.”
When it was her turn to speak, Mrs. Chime could not. Her husband and brother had to persuade her for a long time before she could.

On the petition to the National Human Rights Commission, she corroborated an earlier text message she had sent to her husband that she had not met Falana or engaged him to seek her release from a purported unlawful custody.
She rather admitted that she wrote a letter to her doctor, Dr. Agumuo and another doctor overseas who she was introduced to and wondered how the letter leaked to the public.

Clara also admitted that she was once confined to a room without access to her telephone and laptop. She said, “That was when I had a serious crisis.”
The governor’s wife also confirmed that she has the key to her room and controls her entry and exit, contrary to the claim in the petition that she had been locked up for asking to be allowed to leave.

Her grouse was that she had not been allowed to leave the premises. “Though I attended mass last Sunday,” she said.
Her husband came in here and said, “All I want to reassure you is that she is safe here. Her confinement within the premises for now is at the instance of her doctor who is here.”

Femi Falana’s Own Side Of The Story

Human rights advocate Femi Falana has repudiated the claim by the governor of Enugu State, Mr. Sullivan Chime, that he did not receive a brief from his wife to represent her to secure her release from the illegal detention imposed by her husband, the governor.

“I wish to say, without any fear of contradiction, that I have her instructions in writing to challenge her illegal detention at the Government House, Enugu,” he declared in a statement on Wednesday.  “Through the assistance of some of the security personnel in the Government House she has since spoken to me on phone to confirm her instructions.  Indeed, Mrs Chime’s  mother and her personal physician have also been in touch with me urging me to take all appropriate measures to secure her freedom from Governor Chime’s illegal confinement.”

Beyond that, Mr. Falana pointed out that contrary to the governor’s diversionary statement, he does not need the instructions of citizens who are illegally detained to demand for their release.

“Without any instructions I am duty bound to file cases in court to secure the enforcement of the fundamental rights of detainees to personal liberty.  For the avoidance of doubt, the doctrine of locus standi in the area of human rights has been abolished by the Fundamental Rights (Enforcement Procedure) Rules 2009 which came into force on December 1, 2009,” he said.
Mr. Falana noted that at the press conference Governor Chime succeeded in confirming the allegation that he has held his wife in illegal custody but attempted to justify the illegality by alleging that his wife has “a medical challenge”.

Said the statement: “When Governor Chime was recently medically challenged he was not subjected to solitary confinement in the Government House but flown abroad for adequate medical treatment,” the lawyer said.  “But Mr Chime has conspired with his private physicians to sentence his wife to unwarranted mental torture and psychological trauma in a room in the Government House for the past four months.  If Mr. Chime’s claim is correct that the wife is non compos mentis, when was the Enugu Government House converted to a psychiatric hospital?

“Having confirmed the allegation that he has willfully infringed the fundamental rights of his wife to personal liberty, dignity of the person and freedom of movement Governor Chime should release his wife from illegal custody [and] be warned not to divert attention from the brutal abuse of the rights of his wife.  If he and his doctors are convinced that she is medically challenged they should send her to a hospital for quick recovery!”

From all indications, this woman is battling a serious mental health issue that requires immediate medical intervention.

Instead of keeping her in confinement, Governor Sullivan Chime is urged to release her for proper treatment.