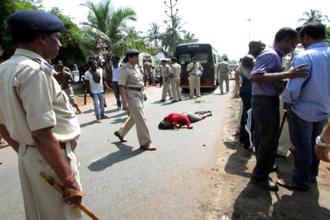 Nov 7, 2013 – Indian Drug Dealer Who Stabbed A Nigerian To Death In Goa Arrested

On Wednesday November 6th, 2013, Indian Police confirm the arrest of a Goan native who allegedly stabbed a Nigerian man to death in the holiday state.

The suspect, who is in his mid-30s, was detained on Tuesday night in north Goa, accused of being part of a gang who stabbed the Nigerian to death last week, a senior police official told AFP.

Further arrests were expected soon, said the official, speaking on condition of anonymity.

Tensions have been rising in the western resort state since the man was found dead on October 30, with police blaming the killing on rivalry between local and Nigerian drug traffickers.

The arrest came after Nigeria told India on Tuesday that it feared for the safety of its nationals in Goa and called for immediate action against those behind the killing.

Goan police arrested 53 Nigerians last week after around 200 of them staged a protest against the killing, chasing a police hearse carrying the corpse of the dead Nigerian and putting the body on the road.

Following the demonstration, which blocked Goa’s main highway for several hours, Goa’s Chief Minister Manohar Parrikar asked police to track down Nigerians living illegally in the former Portuguese colony so they could be deported.

After the protest, a minister in the state’s Hindu nationalist Bharatiya Janata Party government, Dayanand Mandrekar, stirred more controversy by saying: “Nigerians are like cancer”.

Nigeria’s High Commission issued a diplomatic note and demanded on Tuesday that the security of its nationals be assured.

The Indian government said it was in touch with Abuja and added Nigeria has sought an official probe.

“Obviously the Nigerian High Commission is concerned and there is a sense of anguish at what may have happened to some of their nationals,” Indian Foreign Ministry spokesman Syed Akbaruddin said.

“They have requested a thorough investigation and asked us to bring to book those who are involved in the death of the Nigerian national and the consequent issues that followed,” he told reporters in Delhi.

The spokesman said the Goa state government had promised a report on the matter tomorrow.

May the soul of that innocent man rest in peace.