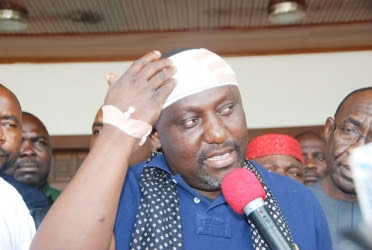 The Governor of Imo State who suffered a serious head injury on the 19th of April when a speeding car rammed into his convoy was initially air-lifted to a private hospital in the London, UK for treatment.

According to a source who claims Rochas Okorocha’s injury is serious, the able governor has been transferred to a specialist hospital in Israel for further treatment.

Mr Ebere Uzoukwa, the SA to the governor who initially said Okorocha wasn’t wounded revealed that “He has left London and he is doing very well. He is currently in Israel”.

The philanthropic governor got involved in a terrible car crash precisely at Orlu-Owerri Road in Imo state last week.

These people are deceiving themselves. How can you transport him to Israel if his injury is not serious.