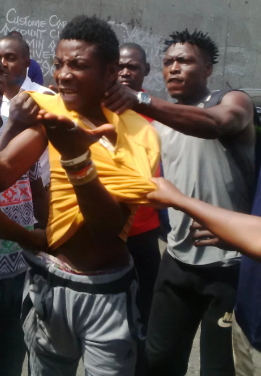 An Ikeja Magistrates’ Court in Lagos on Tuesday sentenced a 28-year-old unemployed graduate, Chika Naso, to 18 months imprisonment for stealing a Blackberry phone valued at N40,000.
Magistrate A.A. Adesanya handed down the verdict after Naso pleaded guilty to the charge without an option of fine.

“You are hereby sentenced to 18 months imprisonment with hard labour,” he said.
Naso at his arraignment on Tuesday admitted that he committed the offence, attributing it to the handiwork of the devil.

The accused urged the court to temper justice with mercy in sentencing him.
The accused, whose address is unknown, was charged with intent to commit felony and stealing.

Earlier, the prosecutor, Insp. Goerge Nwosu told the court that the accused committed the offences on May 16 at Pharm Affairs Supermarket at No. 6, Coker Road, Ilupeju, Lagos.
He said the accused unlawfully entered the supermarket and stole a Blackberry phone valued at N40, 000 property of Mrs Oluwaseun Abejoye.

“The accused entered the supermarket under the pretext of buying goods and in the process, stole the phone from the cashier’s table and went away without buying anything.
“When the complainant discovered that her phone was missing, she raised an alarm,” he said.

The prosecutor said the identity of the accused was revealed by the CCTV camera installed at the supermarket.

“The complainant sighted the accused on the road after three weeks, she raised an alarm and the accused was arrested.”