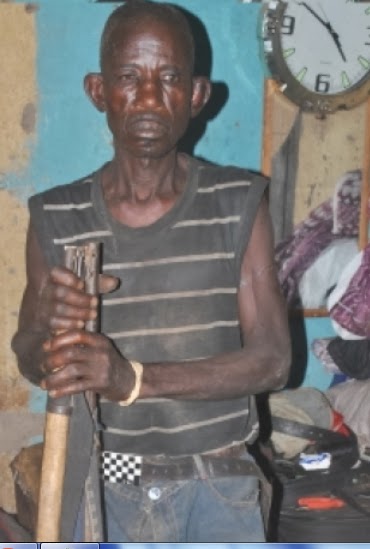 Alhaji Kayode Ganiyu, a 71-year-old grandpa is currently cooling in police detention after he allegedly raped a primary school student identified as Taye.

According to source who initially witnessed the revelation of the rape case, the 7-year-old girl was returning from school when she was lured by the old man with N10 into his cluttered private one room apartment deceitfully telling her he wanted her to purchase sachet water for him.

The loud cry of the poor little girl, SaharaReporters learns attracted the attention of passerbys who immediately inquired into the incidence.

Narrating her ordeal, the little Taye said she was returning from school and stopped at a nearby well opposite Mr. Ganiyu’s house in order to fetch water and drink but decided against it because the well water was too dirty.

She alleged that ‘Alhaji’ as he is popularly known in the area, was watching her, as she meant to leave Mr. Ganiyu called her into his dingy apartment to get money to purchase water, however, soon as she walked into the room, he forced her onto his bed, covered her mouth and raped her repeatedly

‘’I was thirsty and coming back from school inside the hot sun when Alhaji waved and called me to come and collect money for pure water. I sat down, and he searched through his cloth and brought out N10. I never knew he had closed his door. He pushed me onto the bed, covered my mouth with his hand and did it’’, she narrated and cried profusely.

The little schoolgirl explained that the old man raped her twice. ‘’I was crying painfully when he was raping me, but he would not listen”.

She also said she bled continuously after the incidence while Alhaji cleaned her up with a ‘rag’ and threatened her with a dane gun if she tells anyone.

Confirming the bad news, Mrs. Mary Michael, the mother of the victim, said they she was inside the room cleaning when a neighbor broke in with a ‘thunderous voice’ to report the ugly incidence.

“We were inside the house when some people shouted my name and said I should come and see what has happened to my daughter”. Stressing further, she said her daughter was weeping that one Alhaji called her and carried her inside the house.

Mrs. Mary revealed that she took her daughter to the hospital where a doctor disclosed that her daughter was truly raped.

“They are lying. I didn’t rape her,” He said softly as if looking for pity.

He said the little girl only approached him to buy her biscuit which he did by giving her money.

“I only gave her money to buy biscuit for herself when she complained that she is hungry”.

But when asked by our correspondent how much he gave her, the old man refused to talk and pretended to be sick.

Many residents who spoke on the incidence accused him of being a serial rapist. They alleged that the old man who also engages in local voodoo practices reported claims that his “gods” are pleased when he rapes little virgins.

SaharaReporters gathered that the old man, who is a hunter, had been living on the street for close to 10 years

The spokesman of the command, Mr Kayode Balogun told SaharaReporters that the accused is “presently in our custody and will be taken to court soon”.