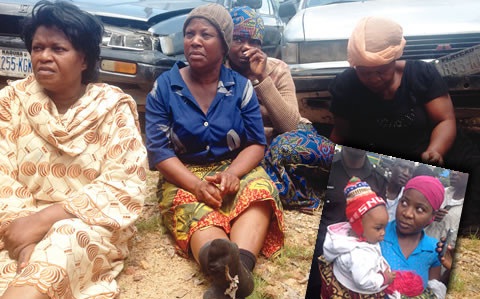 An 8-month-old baby girl named Chiamaka Obinna, who was allegedly sold by her grandmother for N200,000 and taken from Jos to Onitsha, has been found about one week later and re-united with her mother.

It was gathered that the baby’s grandmother (names withheld), who lived at Rukuba Road by Grafitti Hotel in Jos had on July 19, this year, sent her daughter, who is the mother of the baby on an errand and sent away her other children apparently to pave way for her to dispose of the baby.

Thereafter, some women came to her house and she allegedly gave the baby to them. Unknown to her, some of the neighbours saw her remove the baby from her back and handed her over to the strangers.

When the mother of the baby who gave her name as Blessing Godspower, returned and asked of her baby, her mother feigned ignorance of her whereabouts, saying she must have been taken away by her other children. But when the grandmother’s other children returned and Chiamaka was not with them, Blessing raised the alarm.

This attracted the neighbours, who informed that they saw her mother handing over the baby to some people. She denied the claim and the matter was reported to the police.

However, during interrogation, the suspect allegedly confessed selling the baby to one Eucharia, who had in turn, taken the baby to Awka in Anambra State and sold it to one Rita for N330,000.

Rita in turn, sold the baby to one Grace for N500,000. The grandmother was said to have told her interrogators that she was yet to receive her share of the illicit deal before the bubble burst.

The state police commissioner in Plateau State, Mr Chris Olakpe said the baby was recovered at Awka on July 24, 2013 through the intelligence of detectives of the command.

He said that upon interrogation, the suspect stated that she sold the baby because her daughter was not taking proper care of her and that she did it with her consent.

But the baby’s mother denied knowledge of the intention to sell her baby, saying as a mother, there was no way she would put up her baby for sale.

Mama Ajasco, Moji Oyetayo Talks About Divorce & Journey Into Nollywood
Chika Ike Holidays In The US After Divorce Celebration (Photos)