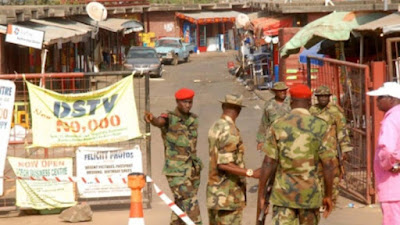 Soldier Loses 4 Fingers, 3 Others Injured While Trying To Inhale Grenade Powder In Abuja

A soldier at Mogadishu Cantonment popularly known as Abacha Barracks in the Federal Capital Territory (FCT), Abuja, has lost about four fingers when a grenade exploded in his hands.

The victim and three others, sources said, were trying to remove the powdery content of the hand grenade for sniffing to be high when it exploded. While the victim is being treated at the hospital, the three others are currently being interrogated by the military authorities for unauthorised possession of firearms.

A military source told our correspondent yesterday that the soldiers were being locked in the barracks’ guard room. The incident, according to the source, took place on Tuesday inside the barracks when they wanted to open a 36-hand grenade so they could inhale the powder inside in order to make them become high. “The accidental explosion did not claim life but people got wounded.

One of them even lost about four fingers,” the source said. The source disclosed that 20 live rounds ammunition of Uzzy rifle were also found in their room “Yesterday (Tuesday), at Abacha Barracks, a hand grenade exploded in the hands of some military guys who were trying to open it. They intended removing the powdery content for sniffing to be high,” the source added.

The soldiers are identified as Lance Corporal Ali Mustapha, Privates Stanley Felix, Maiyaki (who sustained injuries) and Yusuf Dambo. “The soldiers wanted to carefully open a 36-hand grenade so they could inhale the powder inside in order to make them become high.

Unfortunately, in the process, the grenade exploded. Now all of them have been locked up in the guard room for further investigation on how they got the grenade and the ammunition. The wounded soldier is being treated at our hospital,” the source added.