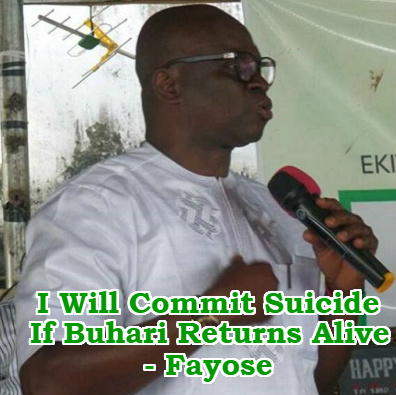 The Muslim Rights Concern (MURIC) has urged Ekiti state governor, Ayo Fayose, to inform Nigerians when he plans to commit suicide now that President Muhammadu Buhari is back in Nigeria.

This is contained in a statement by MURIC president, Professor Ishaq Akintola, in his message welcoming Buhari.

He reminded Nigerians that Fayose allegedly promised to commit suicide if Buhari returns to Nigeria alive.

“Well, the president is back and Nigerians owe it a duty to ask whether or not Fayose would redeem his pledge. Is Fayose a man of his words? Will Fayose commit suicide? Will he be man enough to do just that?” Akintola quipped.

“Fayose is an interesting study in political fanaticism and executive exuberance. The garrulous self-confessed danfo conductor just pushed his luck too far this time around. We are constrained to ask: Where is Fayose’s integrity?

“We recall the #ResumeorResign and #OurMumuDonDo protests staged in Abuja and London against the continued absence of Buhari. Those protesters manifested heartlessness, pettiness and the inhumanity of man to man.

“There was no reasonable casus belli for protests when no law has been broken and there was no palpable lacuna in the presidency. How can you protest against a man for seeking medical attention? It is the height of wickedness.

“It is clear to discerning minds that Buhari’s departure from London was not due to pressure from protesters. He had confirmed two weeks ago that he was physically fit but waiting for his doctor’s orders. He had also said he was feeling homesick and willing to return to Nigeria.

“Besides, those protests stood logic on its head. Where on earth have you seen a man who won a presidential election abandoning his plump job, the pump and pageantry just for the fun of it? Where is it done?

“We have heard of sit-tight syndrome in presidencies but we have never heard of any run-away phenomenon in governance. Not in Europe, not in Asia, not to talk of it happening on the African continent where leaders are known to love staying in power for decades.

“But the wind has blown and we have seen the ruff of the hen. Looters used part of the humongous amounts of money stashed away in secret accounts to rent idle and jobless stowaways to stage protests. It is corruption fighting back. The sponsors of those protests in Abuja and London should bury their heads in shame”.