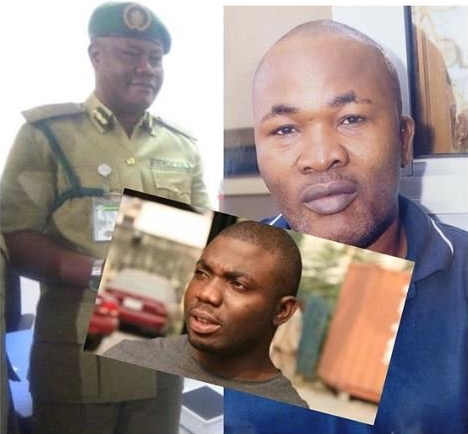 The EFCC has arrested the Controller, Kirikiri Maximum Correctional Centre, Emmanuel Oluwaniyi over a $1million scam coordinated from the prison yard by a convicted internet fraudster, Hope Olusegun Aroke.

Aroke, who is serving a 24-year jail term, allegedly masterminded an almost $1.5 million “mega scam” from inside the prison.

He was also said to attend parties and operate bank accounts, among other things, while serving his sentence.

A statement by the Head of Media and Publicity of the commission, Mr. Wilson Uwujaren said:

“The EFCC, Lagos Zonal office, has arrested the duo of Emmanuel Oluwaniyi, a Deputy Controller (DC), Nigerian Correctional Service (NCS) and Hemeson Edson Edwin, also a DC, for allegedly giving exaggerated medical reports that warranted a convicted internet fraudster, Hope Olusegun Aroke, who is serving a 24-year jail term, being given a referral to be treated outside the facility.

“The first suspect, Oluwaniyi, who is the Controller, Kirikiri Maximum Prison, as well as the second suspect, Edwin, who is in charge of the medical facility, were arrested on Monday, November 25, 2019, by operatives of the Commission.

“The suspects have given useful information to the Commission about their alleged involvement in the crime.”

The EFCC also released a brief on Aroke and how he has been operating “a web of an internet fraud scheme that traverses two continents.”?

The statement added: “Aroke, also known as H. Money, had masterminded a mega scam to the tune of over $1m scam.

“He committed the alleged crime from prison, using a network of accomplices. Aroke was one of the two Malaysia-based Nigerian undergraduate fraudsters arrested by the EFCC towards the end of 2012 at the 1004 Housing Estate, Victoria Island, Lagos, following a tip-off.

Aroke, who hails from Okene in Kogi State, had claimed to be a student of Computer Science at the Kuala Lumpur Metropolitan University, Malaysia.

“However, investigations by the Commission revealed Aroke as the arrowhead of an intricate web of an internet fraud scheme that traverses two continents.?

“When Aroke was arrested, a search conducted by EFCC operatives on his apartment led to the recovery of several items such as laptops, iPad, traveling documents, cheque books, flash drives, internet modem, and three exotic cars – a Mercedes Benz Jeep, One 4Matic Mercedes Benz Car and a Range Rover Sport SUV.

“He was eventually convicted by Justice Lateefa Okunnu of the Lagos State High Court, Ikeja on two counts of obtaining money by false pretence, cheque cloning, wire transfer and forgery.

He was sentenced to 12 years imprisonment on each of the two counts.”

Earlier, the EFCC had released the details of his escapades in prison.

The commission said “a preliminary investigation showed that Aroke continued “to ply his ignoble trade” from inside the Lagos prison by using a “network of accomplices” to target victims in various nations, accumulating close to $1.5 million in the process.

“Preliminary investigation revealed that the convict, against established standard practice, had access to internet and mobile phone in the correctional centre where he is supposed to be serving his jail term.

“Even more “puzzling,” Aroke also was taken to hospital for an undisclosed illness, and instead of returning to the prison, he ended up at hotels, where he would meet his wife and children and attend social functions, authorities said.

Continue Reading
You may also like...
Related Topics:arrested, boss, kirikiri