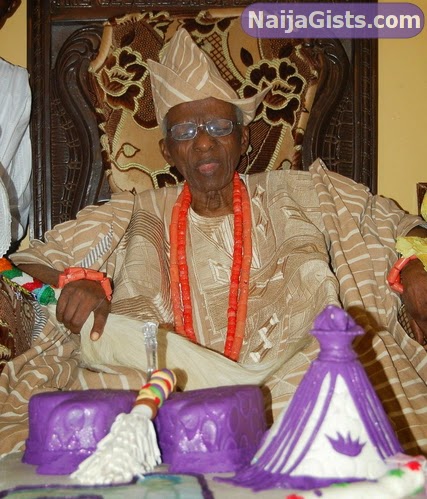 Excitement, graceful dancing and drumming will be colourful spectacle on major routes and public spaces in Ibadan, Oyo State capital from today till weekend, as the people pay homage to celebrate the traditional ruler of the city, the Olubadan of Ibadanland, Oba Samuel Odulana Odugade 1 who clocks 100 years today.

The centennial birthday celebration, which will feature a church service, carnival show, symposium, Jumat service, stage play, chieftaincy award, a grand finale party and homage by his subjects, is significant not only because of the grace of longevity afforded the revered monarch but also because his reign, now in the eighth year, has brought with it unprecedented developmental strides and progress as well as aesthetic face-lift to the city, hitherto pejoratively ranked as “one of the dirtiest cities in Africa.”

Although largely apolitical, the monarch has earned great respect as a fearless, moral force with his intervention in providing a compass to guide political processes and actions, at a time the land is threatened to be swamped by aberrant political order.

A soldier, World War 11 veteran, seasoned civil servant and former minister in the First Republic, self-effacing Oba Odulana has contributed his quota to national development, before his ascension to the throne, after the demise of his predecessor, the late Oba Yunusa Oladoja Ogundipe, Arapasowu I, in 2007

His journey to fame and greatness, according to his biographers, began with his birth at Igbo Elerin in the Lagelu Local Government Area of Ibadanland on Thursday, April 14, 1914 to Pa Odulana Ayinla. He began his elementary education at Saint Andrew’s School, Bamigbola, in the present Lagelu Local Government Area in January 1922 and obtained a transfer to St. Peter’s School, Aremo in 1929. He completed his middle school education at Mapo Central School in December 1936. He equally strengthened his education via correspondence college.

He had a brief stint with United Africa Company (UAC) as a produce clerk before taking up teaching at the church Missionary Society (CMS) Elementary School, Jago, in the present Ona-ara Local Government Area, in 1938. He also taught in several schools from 1939 to 1942. He however, willingly relinquished the chalk to pick the more challenging duty of Army officer during the 1939 World War 11. The lessons learnt at his duty post was well utilised, such that upon the end of the war in 1945, he was put in charge of the demobilisation of returning soldiers in Lagos, which earned him an exemplary character award of the Army Fourth Brigade and this climaxed into an immediate appointment with the Colonial Office Education Department in 1946.

While in the civil service, where he was until 1959, Oba Odulana actively assisted in the establishment of both primary and secondary schools in various parts of the old Western Region of Nigeria. Oba Odulana voluntarily retired and embraced politics to represent his people in the 1959 pre-independence federal elections, as a member of the House of Representatives. This led to a string of political achievements, such that: He was appointed the Parliamentary Secretary to the Prime Minister, Alhaji Abubakar Tafawa Balewa, in the country’s first independent cabinet.

In 1963, he attended the epoch-making Commonwealth Conference in London. He also became the country’s Minister of State for Labour.

In 1964, he led the Nigerian Parliamentary delegation to the London Constitution Conference to restructure the then British colonies of Rhodesia and Nyasaland now known as Malawi, Zimbabwe and Zambia.

Oba Odulana’s political career was truncated by the 1966 Nigeria’s first military coup, but he evolved to become a philanthropist, progressive and community icon. He graced the Ibadan socio-cultural landscape with so much fanfare that gave rise to him being the co-founder of prime organisations mobilising Ibadan people for grassroots developments, such as the Ibadan Economic Foundation and the Ibadan Progressive Union, which was created to ensure that the high standards of patriotism and self-sacrifice of the Ibadan founding fathers were maintained by the present generation of indigenes. These laudable achievements, no doubt, contributed to his conferment of a honorary degree of Doctor of Management Technology by the Federal University of Technology, Akure, Ondo State, in December 2005.

His ascension to the throne kick-started with his appointment as the Mogaji (Head) of his Ladunni family compound, at Oja-Igbo in 1972. In 1976, Olubadan became the Jagun-Olubadanland. Thus, with a steady rise, getting 22 steps on the ladder of Ibadan’s unique chieftaincy succession system within a period of 31 years, Oba Odulana became the Olubadan of Ibadanland on Friday, August 17, 2007.

Under him, Ibadan, which was founded in the 16th Century by Lagelu, a warrior- prince from Ile Ife, has witnessed a phenomenal growth. The city had since continued to draw people into its expansive bosom, even as it witnessed a tremendous burst of activity in the prelude to and post-independence era, serving as capital to the old but wealthy Western Region and later Western State out of which the present Oyo State was carved out, in a succession of atomisation of the defunct political entity by successive military rulers.

Today, Ibadan stands imposing as Africa largest traditional megalopolis. It is a city whose character is cast in contrasts, irony and paradox: A sprawling mass of buildings with rusty corrugated iron sheets and pristine architecture, interspersed with a few modern structures, spread out in numerous directions beyond what the eye could see, but with no particular order.

[Reported By Yinka Fabowale, The Sun]