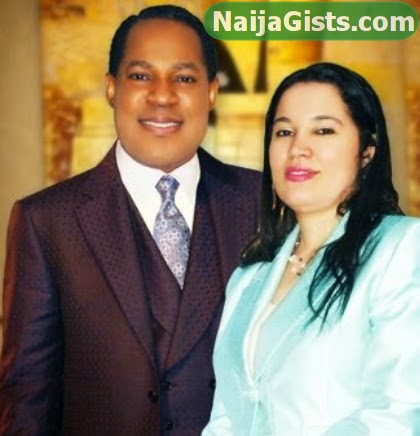 Anita Oyakhilome’s Picture Removed From May 2014 Rhapsody Of Reality

The latest talk in town is that the founder of Christ Embassy Church, Pastor Chris Oyakhilome has left his wife of many years, Rev Anita.

It first started like a joke last year when the man of God reportedly moved to South Africa alone leaving his wife behind in London.

After over 10 months of denial, Pastor Chris reportedly told his church members that his marriage to Anita has crashed because she is keeping bad friends.

His concerned church members have taken the case to the social media to solicit for a reunion for the sake of their two beautiful daughters and the success of the ministry.

A Facebook page titled ‘Where Is Anita Oyakhilome’ has been opened to help in bringing the couple together.

On Friday, the 16th of May 2014, during a meeting with all the Christ Embassy Pastors and Deacons in the United Kingdom at Christ Embassy Church Bermondsey in London, Pastor Chris Oyakhilome reportedly opened up about his marriage problem.

He talked at length about his wife and how bad friends have influenced her.

Here is the excerpt from the message:

– I am here for your concerns about the ongoing domestic issue with my wife and I know it affects you directly been the ones under her leadership.

-This is not an organisation or a political party, so it’s not a place for you to air your opinion or scrutinise what we do. We had a vision, started and you joined us. If you don’t like what we do, you can get out.

– Some pastors wives think when they marry a pastor they are equal to the pastor. My wife thinks so, as a matter of fact, Rev Tom was her pastor before I married her and Rev Ray and Evang. Owase were her leaders long before I married her. How come she thinks she’s senior to them now?

– Be careful of the friends you keep. My wife keeps friends who bring out the worst in her and help her see the worst in people instead of keeping friends that will help her vision especially as the wife of a global pastor like me.

– Bitterness is prolonged and accumulated anger. My wife is always angry and bitter.

– Allegations are either false or twisted information. The current situation is not as a result of what I did or what I didn’t do. I didn’t do anything to have caused an upheaval.

– You don’t join a woman to fight her husband.

– I’m not teaching you what is wrong, at least I have 2 girls who will one day marry and I want to them to enjoy it.

Ironically, Pastor Chris brought his daughter to the pastors’ meeting to hear all of the above about her mother, what trauma will that cause the child? We thought parents avoid arguing in the presence of their children.

This is not new in the body of Christ, Pastor Benny Hinn recently divorced his wife and the two reconciled few months after.

Please join Pastor Chris Oyakhilome and Anita in your prayers for divine intervention in their marriage .

Let’s not point accusing fingers because this can happen to anyone.