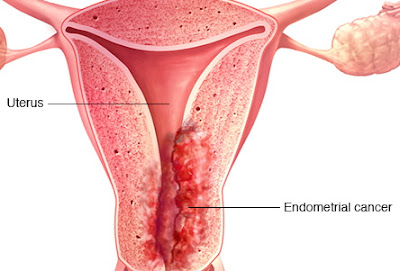 How To Protect Yourself From Uterine Cancer, Common Symptoms To Watch Out For

What are the risk factors or reasons for cancer of the endometrium?

Most commonly, this cancer affects women who are in very late stage of their reproductive years or past their reproductive era. That is not to say, that it may not occur in other age group. It certainly could depending on the circumstances. Since menopause occurs in women who are in their late forties or fifties, cancer of the womb are most frequent in this age range.

Women without children of their own who had never used the womb to carry pregnancies are at risk. In fact, the fewer the number of pregnancies the woman carried, the more the risk, the evidence appears to suggest.

Furthermore, women who are frequently menstruating, without say a break occasioned by pregnancies or medication that help to cease menstrual period, are at increasing risk of this cancer. This cancer is even more dangerous in a case whereby the hormones that is called estrogen operates alone without opposition from the hormone that is called progesterone even though the woman requires these two hormones for balance.

From the foregoing, it’s clear that the later a woman reaches her menopause, the more she is exposed to estrogen for long, the higher the risk of cancer of the endometrium in the woman.

Being obese is a bad risk for cancer of the endometrium. This is so because of the link between obesity and the hormone that I referred to above. A new study of late had shown that exercise (being likely to reduce obesity) do helps to prevent both cancers of endometrium and cancer of the breast alike.

In the meantime, if a woman suffers from cancer of the breast and she is treated with the drug called tamoxifen, such woman risks suffering cancer of the endometrium as part of the side effects of the drug of tamoxifen.

Though it appears to be a rarity in Nigeria, women that smokes cigarette bears a higher danger of suffering from cancer of the endometrium.

While none of us chooses our family at birth, some women are at risk of this cancer simply because of the accident of birth or inheritance that they had from their family.

What to look for: Irregular bleeding in a woman who is in menopause or sudden bleeding from the vagina in a women especially if she had reached 45 years and above, should first and foremost suspect likely cancer of the endometrium as the cause of her bleeding until proven otherwise.

What to do: Do not delay. Do not think that your “period has returned” after a break or that you are still “fertile and able to bear children” simply because of vaginal bleeding that resembled your earlier menstrual periods. Danger may be lurking. Go immediately to a competent medical doctor or preferably a gyneacologist for full evaluation. The assessment may include taking a sample of the womb lining (endometrial biopsy/sampling), ultrasound scan of the womb area amongst others.

Treatment: Working with the medical team, you both will decide what direction and treatment that is suitable for you. Such treatments may include surgery to remove the womb and ovaries if the cancer is early and had not spread to other organs. For a certainty, chemotherapy will play a central role in the entire treatment process.

Prevention: The key is vigilance. Check your family history if you carry a risk of any type of cancer. Act to minimise the risk by possibly keeping a vigilant watch on the organ in question or simply have it removed if possible. As I advised above, any abnormal bleeding should be pursued with vigour until fully and satisfactorily resolved. There is no vaccination for cancer of the endometrium. Doing regular and structured exercise may also help.

Using family planning method such as oral contraceptive and vaginal implant (hormone iUCD) do help to minimise the risk. It may sound silly, but it saves lives to have children and reasonable number of children too that you may take care of. In any event, should an unexpected bleeding occur, the wise thing is to have the incident thoroughly assessed. Prevention is cheaper, much cheaper than treatment.

Continue Reading
You may also like...
Related Topics:Cancer, prevention, uterine