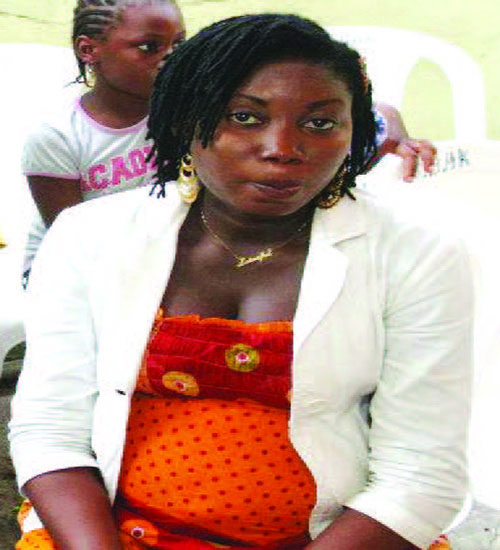 Nov 5, 2015 – Heartbroken Husband Narrates How Wife Died At Public Hospital In Lagos After Nurses Ignored Her

When Omowumi Shonuga tapped her husband that her water had broken at 5 am on Thursday morning, being a sign of labour pain, anxiety took hold of him. Although he, Ayobanji Shonuga, was remotely happy that his second child was about to be born, he was as nervous as many men would be in that situation.

As the wife’s labour pains increased, the 33-year-old man quickly packed his baby’s things and rushed her to the Rauf Aregbesola Health Centre in Egbeda. Alimosho Local Government Area of Lagos.

His joy and hope began to diminish when he got to the health centre and found out that the hospital gates were locked.

“We got to the hospital around 5 am to meet the hospitals locked. I horned and horned, nobody came out. After a while a woman came out and said there was no doctor to attend to me, that I should take her to the Igando General Hospital.

“I said it was impossible for a doctor not to be on duty in a hospital as big as this. She ignored any other enquiry I was trying to make. As I got back to my car, I saw that my wife had delivered the baby and that she was in a pool of blood and she was also bleeding. It was when I started shouting, ‘Blood! Blood! Baby’ that two nurses rushed out from the hospital.”

Shonuga related the ordeal that Omowunmi went through in the hands of health workers at the health centre last week to our correspondent, saying the hospital’s negligence had turned him into a widower.
Instead of coming to his wife’s aid, Shonuga alleged, the nurses blamed him for not shouting loud enough to have attracted their attention to get the keys to open the gate .

“After they opened the gate, I drove in. One of the attendants picked the baby, but the nurses refused to touch my wife. I asked for a stretcher to take her in, they said they didn’t have. I asked for an ambulance to take her away from there, they said they were not with the keys.
“I had to carry her upstairs with no help from them because they didn’t want to touch her. They said there was no doctor to attend to her.”

After much persuasion from him, the nurses told him to go and buy some injections and drugs that would stop the bleeding while they began stitching a cut his wife had.

“She was shouting that the pain was too much while they were stitching her but they kept telling her to keep quiet. I knew something was wrong and told them to get a doctor. They said he was on his way,” he added.

Shonuga said that in spite of the stitches, Omowunmi did not stop bleeding and the doctor who came in while they were cleaning her up said they should take her to the Igando General Hospital as her case was too critical for them to handle.

“ He looked at her eyeballs and said that she had lost a lot of blood and would need to be transfused but they could not do that at that moment.
“ I asked again for the ambulance so I could take her to Igando. They said they didn’t have the keys yet. It was just packed there doing nothing. It was then I asked after my baby. They kept quiet. Later, someone went out to check the room the baby was supposed to be and said the baby was no longer breathing.

“It was obvious that they abandoned the baby. I went in to carry my wife with the drip on her but insisted that they must give me a referral note and a nurse to go with me to Igando so that her case could be treated as an emergency.
“They refused until their supervisor instructed them to go with me when she heard me shouting. It took another 25 minutes before they came with a note and one of the members of staff went with me,” Shonuga lamented.

“For another 45 minutes, we couldn’t get a bed. After I threw a tantrum that attracted some attention, they began running up and down and said they had created a bed space for her.
“They took her blood sample and insisted that they wouldn’t transfuse her till I had paid N20,000. We argued again that it was an emergency that they should go ahead but at this stage she was already losing consciousness. While they were trying to secure a drip for her, she died.”

Shonuga told our correspondent that he buried his late wife and his newborn baby later that day.
Omowunmi , a graduate of Accounting from the Lagos State University, died at the age of 30, leaving a three- year-old baby girl behind.

Still shaken by the circumstances that led to his wife’s death, Shonuga said he would petition authorities of the public hospitals and vowed that he would not relent until justice was served.

According to the widower, Omowunmi and his baby would have been alive if health workers at the two hospitals had given them the speedy attention they deserved.

“The most painful thing for me is that she suffered so much before she died. She cried and bled on and on, but that did not even move them. There was no doctor on duty and they could not give me an ambulance to handle her case.
“I only took her there because that was where she had her antenatal and they knew her and her health history. If I had known I would have taken her to a private hospital.”

When contacted, the Medical Officer, Alimosho Local Government, Dr. Micheal Ariyibi, said that the Ministry of Health had received a complaint and had begun an investigation into the case. The ministry, he said, would not hesitate to punish those involved in the unfortunate incident.
Ariyibi said,

“The report is with the Ministry of Health already and we are trying to investigate who and who were involved. I’m assuring you that they will not go unpunished.”

The Director of Information at the ministry, Mrs. Deola Salako, corroborated Ariyibi’s claims, saying that an investigative panel had been sent to the health centres involved and any one found to have contributed to the deaths would be sanctioned.