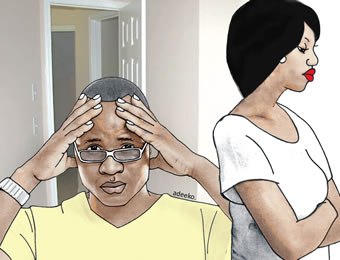 August 12, 2017 – Heartbreak As Husband Catches Cheating Wife In Bed With Another Man In Popular Hotel In Shasha Lagos

Udemeh Ukarette, a 34-year-old man has suffered heartbreak after he caught his wife, Joy Ukarette, a bar owner, with her customer having sex in a popular hotel.

The woman told her husband she committed the atrocity in order to get pregnant and bear a child for him, since he has not been able to impregnate her.

Udemeh and Joy got married 13 years ago.

According to PM Express, the incident happened at Toyin Giwa Avenue in Afonka Shasha area of Lagos.

The woman was said to have discussed it with her husband before sleeping with the stranger and it turned out she started to enjoy the romp and continued the relationship.

When Udeme confronted his wife and asked her to stop meeting the man she reportedly refused and insisted that the man was her big customer.

Joy also threatened to dump her husband and concentrate on the new lover.

Udemeh and Joy hail from Anan in Akwa Ibom State.

They are said to have tried both medical and spiritual assistance to get a child but their efforts did not yield result.

Udemeh had trailed his wife to the hotel where he met her with the man.

He reported the matter to the Akwa Ibom town union, Lagos branch that attempted to resolve the matter but the woman insisted that she will not leave her new lover.

Joy was said to have suggested that she can still continue to marry her husband at the same time maintain the relationship with her lover.

The condition did not go down well with the union.

The president of the Akwa Ibom town union, Robert Akpan, told the newspaper that, “the couple were having issues in their marriage and the union attempted to resolve it to no avail.”