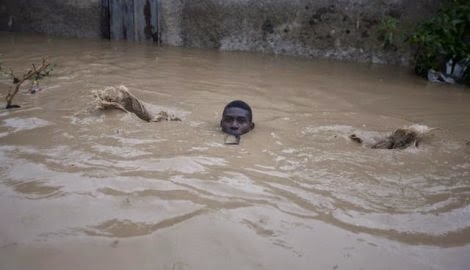 Over 2000 houses have been submerged in parts of Makurdi, the Benue State capital following torrential rainfall which has caused flood in some areas in the last one week.

Some of the affected areas include Inioungu community, Part of Rice Mill and New Garage all in Wadata as well as Kutcha Utebe and behind Zone 4 among others.

According to Mr. Sylvester Adikwu, a retired civil servant whose four bedroom bungalow has been submerged, the flood suddenly came a few days back and many families had to relocate from the area.

Adikwu who was seen with his wife and children trying to evacuate their belongings from their home expressed surprise at the suddenness of the flood maintaining that it is almost like the flood that happened three years ago when water was released from the Ladgo Dam in Cameroun.

Meanwhile, the Parish Priest of St. Joseph Quasi, Iniongu, Revd. (Fr.) Boniface Achobo who disclosed that some of his church members had already informed him that they have relocated to other parts of town expressed the readiness of the church to accommodate displaced members.

“Some of my parish members have called to inform me that they have had to relocate to other parts of the town because of the flood. that is why I quickly announced yesterday in the church that any members who wishes to take refuge in the church pending when the flood will subside can do so.”