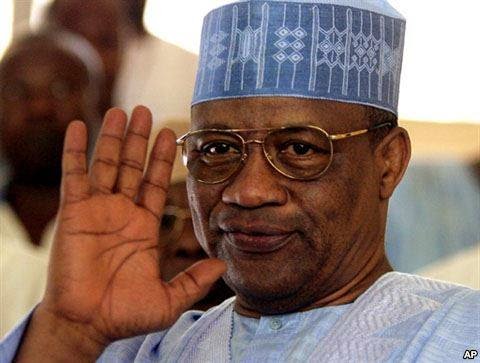 June 6, 2015 – Help! Babangida And His PDP Sons Are Still Stealing From Us Everyday

Dear new government, it is hurting; Ibrahim Badamosi Babangida, IBB and PDP-sons are still dipping their hands into the mekunu’s (proletariat’s) pocket and stealing every blessed day!

They shared up Nigeria’s oil wells…wells for each and every one of us, Alakija got that massive one for instance. IBB did not even negotiate the State share in it, he gave it to her clean-clean, 50% for her, 50% for the foreign explorer. This is sheer robbery. What happens to the people being poisoned and dying in the creeks as Alakija and IBB loot the resource silly? IBB’s brother by adoption, General Abdusalami did similar, allocating Nigeria’s largest oil block to their in-law, Colonel Sani Bello (the corruption-made billionaire whose son is now Niger state governor). They steal to get power and get power to steal. $480 billion they stole in the past 30 years and they are keeping on ripping us off without shame, now under you! Dear Buhari, Dear Osinbajo. What about the people? What about the masses dying in poverty as this corruption finances bullets and bombs Boko Haram uses to kill them? What about the farmers and cattle rearers killing and being killed in competition for resource in a nation deprived of opportunity these thieves have usurped being able to buy and build on all the available land with the nation’s common wealth they plundered? So many stole billions under Jonathan, from army men at all levels to civil servants, commissioners, directors etc., all illegally enriched billionaires today and we all know them.

Every day that passes under your watch, IBB and his PDP sons steal more from us. Obasanjo is stealing his own every day in similar fashion through his proxies. You are still talking to NSA Dasuki in spite of him supervising stealing that led to this killing state of insecurity.

You do not need mark time. The people are with you. These are clearly demonstrable thieves, no different from the student in Nasarawa who got tossed in jail just yesterday for stealing a N10, 000 cell phone. You do not need an expensive system in place to arrest them and immediately stop the stealing. The ordinary police have the capacity to do so, let’s not fool ourselves. Unleash the same police that arrested the Nigerian student petty thief on these people and hold them while sealing off their illegally obtained oil wells pending full investigation. Nigerians are solidly behind you now, and we will support these drastic actions, do not fear the cabal… after all, what could their combined wealth and power get PDP son Jonathan? Nothing! But we may not always be behind you if you go—slow and betray our mandate. Every day counts, every day it hurts.

Every day, the PDP sons steal from us with this most exorbitant GSM. They hinder our communication and hence our access to prosperity and health by ensuring we pay the highest phone bills in the world – we pay to call, we pay to buy data separate, etc., etc., whereas all over the world there are cheaper and cheaper combined plans that cost a fraction of what we pay in Nigeria. Are these thieves not ashamed they steal from both ends – the oil wells and the pockets of Suya sellers, akara sellers, farmers, police officers, school pupils, petty traders, employed and unemployed alike? Babangina and PDP sons’ cabal who help them steal from us daily via these telecoms systems have called it akin to “ritual money.” Every day under your watch, we are hurting from set syphons they use to rip us off in every industry they established and privatised parastatal. Before you know it, it will be 6-days and then 6-months and then 6-years. 6-hours of you being in power was enough for you to not only face Boko Haram, these people who should be in jail created, but also to unleash on the founders and sponsors of this terrorism. So long as they are free, can we truly crush Boko Haram? Do we not recognize that Boko Haram, the worst terrorists in recent history, occurred in Nigeria and not Ghana, Lebanon or anywhere else with the same religious and cultural demographics simply because these thieves and their kakistocratic handling of Nigeria over the past 30 years cultivated and funded it? Do we not know that it is because we tolerate thug governors who pay terrorists to do their bidding, like Fayose just did under your watch, that Boko Haram, MEND, Ombatse and the rest are with us today? Do we wish to have a hand in this blood, this pain of unwanted pregnancies that has eternally violated Nigeria? There are mechanisms to show we understand that corruption and barbarism kills. We can arrest, we can declare states of emergency and sack criminal and thug governors. This is the trust and mandate the APC won, not a mandate for stylish tap-dancing.

NiRA, Nigeria’s internet Registration company, founded by Babangida’s PDP son, Obasanjo charges Nigerians $100 per year for a single .ng domain name. Do you know this is the highest rate charged for this service in the entire world? That US .us domains, .com’s and the rest are sold to encourage web entrepreneurs at just $15/year and at times as low as $10/year?

These people are mere shameless pickpockets. And now every day they are picking our pockets under your watch. We pay triple the world price for cement. Why? Is this our reward for giving Dangote concessions over the years, giving him import waivers and bailouts upon bailouts, for the masses to not be able to afford homes and for houses to collapse on our heads because we scrounge cement ‘cause the stuff is too damn costly? Every quarter we see Dangote and the Obasanjo cabal dividing up the massive profits from this siphon of our common wealth and our pocket money and our hearts bleed. We could not rebuild homes after the floods because of this, and now it is happening under your government. Every day matters. Every day we are robbed. Under your watch we are paying exorbitantly for power we do not even have. Every day they steal from us, every day and it is now happening under your watch. A decree or mere declaration will get them to tidy their books. When you won, Abdusalami relocated to the north east to for the first time commence work and monitor the power plant he bought (or rather, was gifted by Jonathan) there. That is the power God gave you. This is why we voted your government.

Shall you tell the police and courts to stop incarcerating petty criminals till you are done with Boko Haram and ready to stop the cabal picking our pockets and stealing from the restive Niger Delta? Without equity there is no justice. Without justice there is no peace and progress. Boko Haram will remain so long as the masses are cheated daily, this is the bitter truth because our soldiers are not motivated, deprived of tools of war and feeling the cabal’s hands in their pockets every day. The masses are not motivated either as they suffer in dilapidated schools used as camps and as the state officials loot the food for their upkeep and rebrand donated food bags for political campaigns.

This revolution wave you rode on to change is not a joke. We are ready to fight and die to make sure that change is real, and we will settle for no less. Are you a presidency for some or a presidency for all; for the petty student thief and the daily greedy cabal or only for the cabal?

5 thoughts on “Help! Babangida And His PDP Sons Are Still Stealing From Us Everyday”