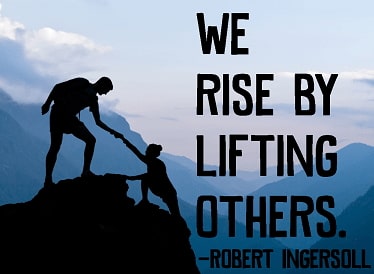 Real Wealth Is Simply Helping Others Discover Their Hidden Riches 2

“We rise by lifting others”- Robert Ingersoll

The purpose of real wealth is not to feed our egos, but to feed the hungry and to help people find meaning in life.

Charbel Tadros said, “A truly successful person is not one who achieves his highest ambitions, but one who enjoys helping others reach theirs.”

A group of 50 people attended a seminar. Suddenly the speaker stopped and started giving each person a balloon. Each one was asked to write his/her name on it using a marker.

Then all the balloons were collected and put in another room. Now these delegates were let into that room and asked to find the balloon which had their respective names written on within 5 minutes. Everyone was frantically searching for their names, pushing and colliding with one another, and there was utter chaos. At the end of 5 minutes, no one could find his/her own balloons!

Now each one was asked to randomly collect a balloon and give it to the person whose name was written on it. Within minutes, everyone had their own balloons.

The Speaker began: This is exactly what is happening in our lives. Everyone is frantically looking for happiness all over the place, not knowing where it is. It is literally true that you can succeed best and quickest by helping others to succeed. Mahatma Gandhi said, “The best way to find yourself, is to lose yourself in the service of others.”

Our happiness lies in the happiness of other people; happiness is a by-product of an effort to make someone else happy.

Help them find their happiness, and you will get your own happiness too. And this is the purpose of human life-to help others by helping them find their joy. Learn to put a smile on someone’s face, and you will also smile in due course.​ When you’re making others to succeed in life, you also become a huge Success. When you dig another out of their troubles, you find a place to bury your own!

Nelson Henderson once said, “The true meaning of life is to plant trees, under whose shade you do not expect to sit.” What we have done for ourselves alone dies with us; what we have done for others and the world remains and is immortal. To have and not to give is often worse than to steal!

A distinguished member of the British parliament travelled to Scotland to give a speech in 1890. In Scotland, his carriage was hopelessly mired in the thick mud of a rural road. A young Scottish farm boy helped the man to move his carriage out of the mud with large draft horses and was ready to resume his journey. The law maker insisted on paying the young man but the lad refused. “Are you sure I can’t pay you for your time and effort?” the gentleman asked. “Thank you sir” said the young lad, “It is a privilege to help such an important person as you”.

“What do you want to become in life?” asked the law maker. “I want to become a doctor, but I doubt that will happen since my family does not have the money for such education” replied the young lad. The young politician promised to help the young man become a doctor and he held onto his promise. Fifty years later, a man called Winston Churchill was the prime minister of Britain during Hitler’s insurgence and he was seriously down and close to death due to pneumonia. The whole of Britain was threatened by the health of their leader. Churchill miraculously recovered because his physician gave him an injection of a new wonder drug called penicillin. Penicillin had recently been discovered by the brilliant medical doctor, Alexander Fleming.

Alexander Fleming was the young boy that had pulled the stalled carriage from the mud. And the man who promised to return the favour by sending him to a medical school was Winston Churchill’s father, Sir Randolph Churchill. By saving the life of Churchill, he might have saved the whole of England and probably the then whole world from Adolph Hitler’s reign of terror.

What a monumental blessing that would have eluded the world, if Randolph Churchill was unable to see a medical doctor in the young farm boy.

William Penn said, “I expect to pass through life but once. If therefore, there be any kindness I can show, or any good thing I can do to any fellow being, let me do it now, and not defer or neglect it, as I shall not pass this way again.” Never underestimate the difference you can make in the lives of others. Step forward, reach out and help. You have not lived today until you have done something for someone who can never repay you. This coming week reach to someone that might need a lift. In about the same degree as you are helpful, you will be happy.

Focus on building up others, and your own sense of self-worth will improve. Make a conscious, concerted effort to make the world better by making someone else’s life better. The bonus: you will be happier by doing it.

Edmund Burke said, “Nobody made a greater mistake than he who did nothing because he could only do a little.” You may not be able to help everybody, but there is someone out there whose next level is totally hinged on your help.

If you can’t feed a hundred people, then feed just one! Nobody can do everything, but everyone can do something. John Holmes said, “There is no exercise better for the heart than reaching down and lifting people up.”

QUOTE OF THE WEEK: “Service to others is the rent you pay for your room here on earth”-Mohammed Ali

Continue Reading
You may also like...
Related Topics:real wealth is simply helping others